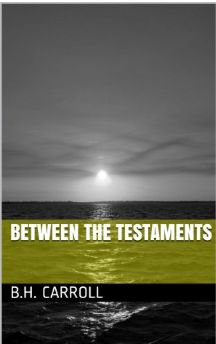 Between the Testaments was written by famed Southern Baptist preacher, B.H. Carroll. Carroll guides the reader through the history between the Old Testament and the New Testament. At the conclusion of each chapter there are a set of study questions for the Bible student to digest and answer.

Between the Testaments was written by famed Southern Baptist preacher, B.H. Carroll. Carroll guides the reader through the history between the Old Testament and the New Testament. At the conclusion of each chapter there are a set of study questions for the Bible student to digest and answer. Click on picture of Carroll to read his biography on wikipedia.org

“Carroll was a denominational leader both in the Baptist General Convention of Texas (of which he was a leading founder) and the Southern Baptist Convention. Much of his rise to prominence developed through proving himself a formidable foe in controversy – including debates with Texas politicians, standing for board policies and convention authority in the Hayden controversy in the Baptist General Convention, and opposing the president of Southern Seminary during the Whitsitt controversy[3][4] at Southern Baptist Theological Seminary. While Carroll had Landmark tendencies, he was not the champion of the Landmark Movement some have made him to be. Of the four major controversies involving Landmark ideas, Carroll sided against the Landmarkers in three of the four.[5] Only in the Whitsitt controversy did Carroll side with Landmarkers and, for Carroll, that controversy was about trustee authority, not Landmark beliefs.

Carroll’s theology can best be described as moderately Calvinistic, postmillennial, and thoroughly Baptist. His postmillennialism was associated with neither the social engineering of Walter Rauschenbusch, nor the expectation that every soul in every community would be converted. Instead, Carroll held such a strong confidence in the work of the Holy Spirit, Christ’s Vicar, that churches who accepted their role as God’s instruments on earth would not ultimately fail in the Holy Spirit’s mission to bring about the conversion of the vast majority of humanity, at which time Christ would return to fully institute His kingdom on earth.[6] Carroll vehemently attacked Roman Catholicism for the papal claim that usurped the Holy Spirit’s role as Christ’s representative,[7] dispensational premillennialism for their pessimism about the success of the Holy Spirit and the success of churches,[8] the Restoration Movement for their reliance on human apprehension and denial of direct revelation, and modernism for the over-reliance on scientific method to the exclusion of Divine revelation and historical evidence.[5] He led in founding the Southwestern Baptist Theological Seminary in Fort Worth, Texas in 1908, which moved from Waco to Fort Worth in 1910.[9] He served as president of the seminary until his death.

See also Knapp, C. – The Kings of Judah and Israel

More Works on the Intertestamental Period

Between the Testaments was written by famed Southern Baptist preacher, B.H. Carroll. Carroll guides the reader through the history between the Old Testament and the New Testament. At the conclusion of each chapter there are a set of study questions for the Bible student to digest and answer.