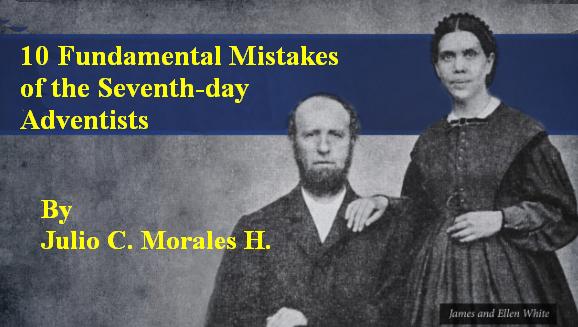 Table of Contents of 10 Fundamental Mistakes of Seventh Day Adventists

10 Fundamental Mistakes of Seventh-day Adventists
1. Human Origin of the Sect
2. William Miller and the Second Coming of Christ
3. Date of the Organization of the denomination
4. Form of government
5. Spirit of Prophecy
6. Sanctuary Purification
7. Rebaptism
8. Doctrine, Practice, and Meals
9. The Message of the First Angel
10. The Seal of the Living God.

Before presenting this apologetic treatise, I want to comment on the reasons that prompted me to publish this pamphlet.

1. Reason number one is that I myself had been going through that movement for a long time back in the years 1937-1949 and was born again and converted on a Saturday, November 20, 1949 (Joh 3: 5-7; 2Co 5 : 17; Tit 3: 3-7). My conversion to the Lord was unconditional to fully consecrate my life to the Lord. But when they were teaching us, thus preparing us to receive baptism, some doubts and difficulties arose about some doctrinal points, and that in the end were sufficient reasons to separate me from the sect.

2. Reason number two is that this denomination has a pharisaic spirit since most of its members are extremely jealous and aggressive and this takes them to the extreme of having and practicing the sin of pride and pride, since they consider themselves the only ones who have the monopoly of salvation and discriminate against all other believers who do not think like them and even boast in saying that we Baptists and all other denominations are doing nothing because we do not keep the Sabbath, and this is exactly what those Pharisees said of yesteryear about the Lord Jesus Christ (Joh 5: 16-18; Joh 9: 14-16).

3. Reason number three. This sect or denomination since its origin has always been dedicated to proselytizing campaigns and propaganda, and even its members personally spend more time persuading members of other sects or denominations instead of spending their time preaching the gospel to reaching convert drug addicts, alcoholics, idolaters, and unbelievers to convert to the true and living God and receive the Lord Jesus Christ as their personal redeemer and savior (Joh 3: 16-21; Rom 3: 23-26; 1Jo 5: 9 -12). After making these comments and giving the reasons that prompted me to write this booklet I now proceed to present the ten fundamental errors of the denomination of Seventh-day Adventists.

Sample Chapter from the Work 2. William Miller and the Second Coming of Christ.

a. At first he preached that the second coming of Christ would be approximately in the month of March, 1843.

As you can see these chapters are short. — editor David Cox