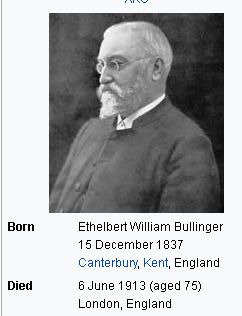 1. – A Refreshing Study On The Resurrection
2. – Christ In The Separate Books Of The Word
3. – Crucified with Christ
4. – Right Division
5. – Stablished — Strengthened — Settled
6. – The Christian’s Greatest Need
7. – The Foundations Of Dispensational Truth
8. – The Ground is Thirsty
9. – The Names of Jesus
10. – The One Great Subject of the Word
11. – The Resurrection Of The Body
12. – They Sang His Praise. They Soon Forgat His Works

Associate of King's College (15 December 1837 – 6 June 1913) was an Anglican clergyman, biblical scholar, and ultradispensationalist theologian. His family traced their ancestry back to Heinrich Bullinger, the Swiss Reformer. He was ordained as a priest in the Church of England in 1862. Bullinger's career in the Church of England spanned from 1861 to 1888. In the spring of 1867, at the age of 29, Bullinger became clerical secretary of the Trinitarian Bible Society, which he held, with rare lapses for illness in his later years, until his death, in 1913.

The society's accomplishments of TBS during his secretariat include the following:

Those works and many others remain in print, as of 2007.

Bullinger described dispensations as divine "administrations" or "arrangements" under which God deals at distinct time periods and with distinct groups of people "on distinct principles, and the doctrine relating to each must be kept distinct." He emphasizes, "Nothing but confusion can arise from reading into one dispensation that which relates to another." He lists seven dispensations:

Other than ultradispensationalism, Bullinger had many unique views. For example, Bullinger argued that the death of Jesus occurred on a Wednesday, not a Friday, after Pilate had condemned him at the previous midnight, and that Jesus was crucified on a single upright stake without crossbar with four, not just two, criminals and that this last view was supported by a group of five crosses of different origins (all with crossbar) in Brittany (put together in the 18th century).

Bullinger argued for mortality of the soul, the cessation of the soul between death and resurrection. He did not express any views concerning the final state of the lost, but many of his followers hold to annihilationism.

Bullinger was a supporter of the theory of the Gospel in the Stars, which states the constellations to be pre-Christian expressions of Christian doctrine. In his book Number in Scripture he expounded his belief in the gematria or numerology values of words in Scripture (names and terms), a concept of which the Encyclopædia Britannica says: "Numerology sheds light on the innermost workings of the human mind but very little on the rest of the universe." He strongly opposed the theory of evolution and held that Adam was created in 4004 BC. He was a member of the Universal Zetetic Society, a group dedicated to believing and promoting the idea that the earth is flat, and on 7 March 1905, he chaired a meeting in Exeter Hall, London, in which the flat earth theory was expounded.

Adapted from E.W. Bullinger - wikipedia.org (which see for footnotes on the above)

Number in Scripture
Commentary on Revelation or, The Apocalypse
Word Studies on the Holy Spirit
The Witness of the Stars
How to Enjoy the Bible
The Book of Job, Including "The Oldest Lesson in the World"
The Church Epistles: Romans to Thessalonians
Figures of Speech Used in the Bible
Great Cloud of Witnesses
A Critical Lexicon and Concordance to the English and Greek New Testament
The Companion Bible
The Two Natures in the Child of God
The Foundations of Dispensational Truth
The Chief Musician Or, Studies in the Psalms, and Their Titles
Ten Sermons on the Second Advent