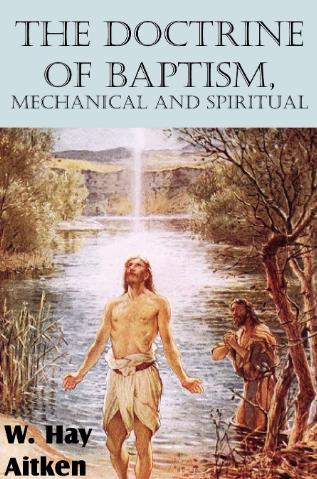 Aitken Doctrine of Baptism is a 8 chapter work on baptism, looking at it from the consideration of Regeneration and Conversion.

Aitken Doctrine of Baptism is an 8 chapter work on baptism, looking at it from the consideration of Regeneration and Conversion. Note that Aitken is Anglican, so getting people wet is the same for him (or about the same) as getting them saved. Water Baptism and salvation merge together in his thoughts.

The Doctrine of Baptism Mechanical or Spiritual?

Doctrine of Baptism
MECHANICAL OR SPIRITUAL?
BY W. HAY M. H. AITKEN, M.A.
AUTHOR OF “THE MECHANICAL VERSUS THE SPIRITUAL,”‘ “THE ROMANCE OF CHRISTIAN WORK AND EXPERIENCE,” “THE SCHOOL OF GRACE,” ETC.
London: JAMES NISBET & CO., LIMITED 21 BERNERS STREET
1901
Printed by Bat, lantern, Hanson & Co. At the Ballantyne Press

CONTENTS  of Aitken Doctrine of Baptism

read Preface to this work

Baptismal regeneration is not the question of the hour; it is rather around the other sacrament that, for the time being, the discussion is most active. Yet, since Holy Baptism is the initiatory rite of our faith, the doctrine of Baptism must need to have to do with what is fundamental in the Christian system, what-ever our theory of that system may be.
Fifty years ago, in the early days of the Oxford movement, baptismal regeneration was a ” burning question “; and it was duly threshed out in our ecclesiastical law courts, with results distinctly unfavourable to the Tractarian interpretation of our formularies. As, however, in this instance, the party of innovation was the aggressor, the adverse decision did not shake the position of its members in our Church; it only rendered it possible for those that took a different view of the Church’s teaching still to find a place within her pale.

The partial defeat carried w^th it the presage of a larger success; for it gave prominence and notoriety to a dogma which had much to commend it to those Churchmen who disliked the Evangelical Revival, chiefly because of its insistence on the necessity of definite and conscious ” conversion.” To High Churchmen, who were also dry, the doctrine was attractive, because it seemed the justification of their dryness; while more earnest men of that school regarded it as a safeguard against the extreme subjectivity of Evangelical teaching. Many sober Churchmen, in other respects suspicious of the Oxford movement, accepted the dogma out of supposed loyalty to the Prayer-book; while not a few unspiritual men rejoiced in it, as a means of escaping the claims of spirituality. So it has come to pass that, of all the tenets of the Mediaeval school, this doctrine of necessary regeneration, by the act of Baptism, exopere operato, is the most generally accepted.

Yet to accept this, in the unqualified form in which it is presented to us by teachers of this party, is to accept the principle on which the whole Mediaeval system rests; while its abandonment is the surrender of that system. For, in the first place, it is here that we meet with the most glaring substitution of the mechanical for the spiritual. And in the second place, that theory of the Church which is absolutely essential to this system, cannot be maintained, if this dogma be, even so much as modified, not to say, abandoned.

My endeavour, in this little volume, has been to examine carefully and impartially the revelation that has been made on this all-important subject. In doing so I shall have to point out wherein it differs both from the teaching of the Oxford school and from certain inexact views on the subject, which sometimes prevail amongst those who have no sympathy with that movement.

All that I ask of my readers is a painstaking and unprejudiced consideration of my argument; let it be tested by an appeal to revelation, enforced with rigorous logic, and by this let my conclusions stand or fall.
W. HAY M. H. AITKEN.
Lansdowne Road, Bedford.

Quotes from The Doctrine of Baptism Mechanical or Spiritual?

First — We affirm that one great change, and only one, is necessary in the case of fallen man, as the condition of his entering the kingdom of heaven; and that this one change is regeneration.

Second. — That this change is, on God’s side, conditioned on redemption, by the death and resurrection of Jesus Christ.

Fifth. — That in cases where the ordinance (as in the instance of Simon Magus) is received without spiritual apprehension of the benefit of regeneration, this must be realized, if at all, at some later point in the man’s experience; when at length faith is exercised in the operation of God.

–from § 66. A Résumé of the Conclusions we have Arrived at

Comment – The author is Anglican, and he is thinking within that context. Babies are baptized in water, and there are saved, so although I would disagree with baptism regeneration by water baptism, he is pointing out that without regeneration, there is no salvation. That statement coming from an Anglican in itself is notable. Basically, their position is get the babies wet, but they don’t enter into heaven without regeneration even though they were baptized as babies.–David Cox

“the doctrine of necessary baptismal regeneration must be maintained, even in the most extreme cases, and where the ordinance is absolutely unaccompanied by sincerity or faith on the part of either officiating priest or recipient, nay, even up to the point of what I have taken leave to call “ regeneration by sacrilege.”

Comment – This is the heart of his position, without an externally visible church, and one’s membership in it, one cannot be saved. I would say that it is difficult for me to understand a person truly saved and not a member of any local church anywhere by his own choice. As a Baptist (myself), I don’t accept sacraments in general, and I do not believe getting somebody wet is going to save them, no matter their age. Only by faith after repentance is a person is saved. But his position does stir up some debate in my own mind. Neither water baptism nor church membership will save a person, but they are necessary consequences AFTER salvation (to me)

Version 2.2 Sept 2020 David Cox, reformatted.
Version 2 June 2020 David Cox, reformatted.
Version 2.1 July 2020 David Cox, more reformatting. Removed page numbering as it is corrupt. Highlighted in Bold the Sections.
-In § 46. The Condition implied by Directions given in two other Cases p80
There were handwritten notes in the left margin that ended up in the OCR as garbled text, removed. Each chapter was copied over to a Word Processor and spell checked to find OCR errors. The difference between British English and American English was not changed. It is as it was in the original work.
Editor’s Notes
-Pages 10-11 are missing in the original PDF. No other pdfs of this work available