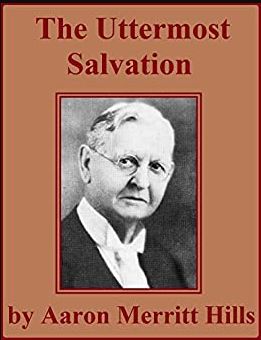 Contents of Uttermost Salvation
Introduction
1. The Uttermost Salvation
2. Holy Like God
3. Cleansing From All Sin
4. How To Obtain The Blessing Of Sanctification
5. Pledge Of Faith
6. Any Man’s Lawyer
7. The Sin-principle Condemned To Death
8. Death Or Glory, Which?
9. The Promise Of The Father
10. Moral Insanity
11. Things That Accompany Salvation
12. Receiving The Holy Ghost
13. A Man Of God Unsanctified
14. The Will Of God
15. The Reason For Our Hope
16. Sanctified Wholly
17. Sanctified By Faith
18. Finished Sin
19. A Two-fold Disease And A Double Cure
20. God’s Keeping

Church of the Nazarene theologian. Educated at Oberlin College and the Yale Divinity School, Hills was for twenty years the pastor of Congregational churches at Ravenna, Ohio; Pittsburgh, Pennsylvania; and Springfield, Missouri. At Oberlin, Hills became greatly interested in Christian holiness through the influence of Charles G. Finney and during his later pastorates increasingly identified with the Holiness Movement. He labored for several years as an evangelist and during this period professed the Holiness Movement’s cardinal experience of “entire sanctification.”

Hills was subsequently founding president of three Wesleyan-Holiness colleges: Texas Holiness University (Greenville, Texas), now part of Southern Nazarene University (Bethany, Oklahoma); Central Holiness College in Iowa; and Illinois (now Olivet) Nazarene University. He also taught theology at Asbury College and Bethany Nazarene College but was associated longest with Pasadena College (Nazarene) in California, where he taught from 1916 until 1932. Hills wrote nearly thirty books, including biographies of leaders in the Holiness and temperance reform movements. The most notable are Holiness and Power (1897), a widely influential book in the Holiness Movement of its day, and Fundamental Christian Theology, 2 vols. (1931), the first Nazarene systematic theology.

Bibliography. A. M. Hills, Collection of the Nazarene Archives; Herald of Holiness (July 2, 1951):4.

Source: Dictionary of Christianity in America

Spideroak.com is another cloud storage product of 2 GBs free.