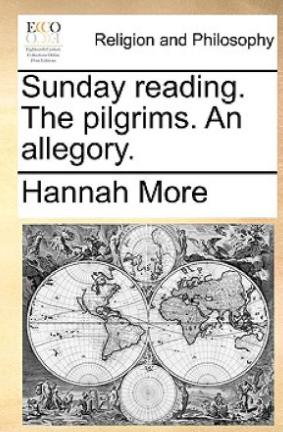 More Hannah Pilgrims is an allegory written by Hannah More.

More Hannah Pilgrims is an allegory written by Hannah More.

HANNAH MORE (1745-1833) was born in Stapleton, Bristol, England. Early in her life she was interested in the theater and wrote plays. For six years her fashionable social life grew to include many important people, but when it lost its appeal she turned to religion. Dr. James Stonhouse is credited with Hannah More’s spiritual awakening, but it was John Newton’s influence that gave energy and devotion to her spiritual walk, and she became a strong Evangelical Christian. Education was a strong theme in her life and William Wilberforce encouraged her to start schools for the education and moral advancement of poor village children. To counteract immoral forces in society, Hannah More, her sister Sarah, and others wrote a series of successful chapbooks called the “Cheap Repository Tracts.” She was also active with a group called the “Clapham Sect” that met at Henry Thornton’s huge house in Clapham. She had a vast social circle and wrote a multitude of letters. Her talent for writing also produced many books of drama, poetry, hymns, fiction and religious instruction. More Hannah Pilgrims

THE PILGRIMS (an allegory) by Hannah More

“These all died in faith, not having received the promises, but having seen them afar off, and were persuaded of them, and embraced them, and confessed that they were strangers and pilgrims on the earth.” Hebrews 11:13

“Dearly beloved, I beseech you as strangers and pilgrims, abstain from fleshly lusts, which war against the soul.” 1 Peter 2:11

I thought I was once upon a time traveling through a certain land which was very full of people; but what was rather odd, not one of all this multitude was at home–they were all bound to a far distant country. Though it was permitted by the Lord of the land that these pilgrims might associate together for their present mutual comfort and convenience, and each was not only allowed, but commanded to do the others all the services he could upon their journey, yet it was decreed, that every individual traveler must enter the far country singly.

There was a great gulf at the end of the journey, which every one must pass along and at his own risk, and the friendship of the whole united world could be of no use in passing that gulf. The exact time when each was to pass was not known to any; this the Lord always kept a close secret out of kindness; yet still they were as sure that the time must come, and that at no very great distance, as if they had been informed of the very moment. Now, as they knew they were always liable to be called away at an moment’s notice, one would have thought they would have been chiefly employed in packing up, and preparing, and getting everything in order. But this was so far from being the case, that it was almost the only thing they did not think about.

Now I only appeal to you, my readers, if any of you are setting out upon a little common journey, if it is only to London or York, is not all your leisure time employed in settling your business at home and packing up every little necessity for your expedition? And does not the fear of neglecting anything you ought to remember, or may have occasion for, haunt your mind, and sometimes even intrude upon you unseasonably? And when you are actually on your journey, especially if you have never been to that place before, or are likely to remain there, don’t you begin to think a little about the pleasures and the employments of the place, and to wish to know a little what sort of a city London or York is? read more on GraceGems More Hannah Pilgrims