He was the eldest son of John Ryle, private banker, of Park House, Macclesfield, M.P. for Macclesfield 1833–7, and Susanna, daughter of Charles Hurt of Wirksworth, Derbyshire. He was born at Macclesfield on 10 May 1816.[1]

He was educated at Eton and the University of Oxford, where his career was unusually distinguished. He was Fell exhibitioner at Christ Church, from which foundation he matriculated on 15 May 1834. He was Craven scholar in 1836, graduated B.A. in 1838, having been placed in the first-class in literæ humaniores in the preceding year, and proceeded M.A. in 1871. He was created D.D. by diploma on 4 May 1880.[1]

Ryle left the university with the intention of standing for parliament on the first opportunity, but was unable to do so because of his father's bankruptcy. He took holy orders (1841–42) and became curate at Exbury, Hampshire. In 1843, he was preferred to the rectory of St Thomas, Winchester, which he exchanged in the following year for that of Helmingham, Suffolk. The latter living he retained until 1861, when he resigned it for the vicarage of Stradbroke in the same county. The restoration of Stradbroke church was due to his initiative. In 1869, he was made rural dean of Hoxne, and in 1872 honorary canon of Norwich. He was select preacher at Cambridge in 1873 and the following year, and at Oxford from 1874 to 1876, and in 1879 and the following year. In 1880, he was designated dean of Salisbury, and at once, 19 April, advanced to the newly created see of Liverpool, which he ably administered until his death at Lowestoft on 10 June 1900. He is buried at All Saints Church, Childwall, Liverpool [1]

He married three times but his first two wives died young.[2] The first marriage was on 29 October 1845, to Matilda Charlotte Louisa, daughter of John Pemberton Plumptre, of Fredville, Kent. The second, in March 1850, was to Jessy, daughter of John Walker of Crawfordton, Dumfriesshire. The third, on 24 October 1861, was to Henrietta, daughter of Lieutenant-colonel William Legh Clowes of Broughton Old Hall, Lancashire. He had a daughter by his first wife, and three sons by his second wife. His second son, Herbert Edward Ryle also a clergyman, became successively Bishop of Exeter, Bishop of Winchester and Dean of Westminster.[1] 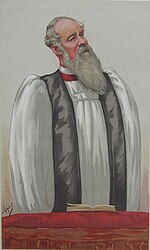 Ryle was a strong supporter of the evangelical school and a critic of Ritualism. He was a writer, pastor and an evangelical preacher. Among his longer works are Christian Leaders of the Eighteenth Century (1869), Expository Thoughts on the Gospels (7 vols, 1856–69), Principles for Churchmen (1884). Ryle was described as having a commanding presence and vigorous in advocating his principles albeit with a warm disposition. He was also credited with having success in evangelizing the blue collar community.[1]