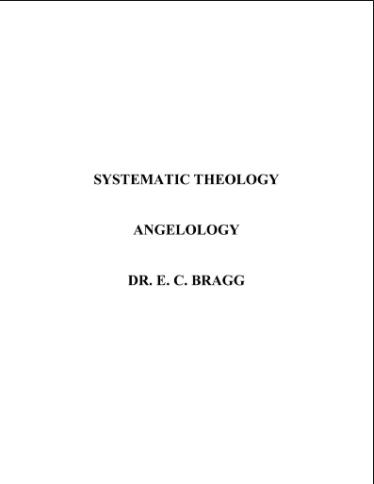 Bragg Angelology Systematic Theology by E.C. Bragg (Trinity College) is a set of classes notes apparently on angels. He is brief but has good material.

Bragg Angelology Systematic Theology by E.C. Bragg (Trinity College) is a set of classes notes apparently on angels. He is brief but has good material.

See Bragg Angelology page at Trinity College for sound recordings of these lectures.

Note that the table of contents does not exactly match the actual notes which I received.

II. Satanology – “Satan and His angels”
The personality of Satan
Satan was created a person
Personal names are used of Him
Personal actions and functions are ascribed unto him
Satan is the most powerful created personage
The origin and fall of Satan
The work of Satan
The believer’s victory over Satan
The destiny of Satan

III. Demonology – Satan’s vast invisible kingdom on earth of fallen, personal agents used to influence mankind.
Introduction
Unbelief in demons
The many times in the Bible their reality is taught
The many times Jesus contested demons
Some theories of the Origin of Demons
“The spirits of wicked men, now deceased.”
“They are the offspring of wicked angels marrying the daughters’ of men.”
The biblical teaching of their origin
The threefold activity of demons in men
Demon Obsession
Demon Oppression
Demon possession
Our victory over demon machinations

IV. The Psychology of Temptation