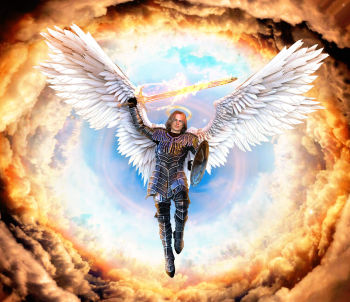 Gann Angels is a single chapter work on angels, looking at various aspects of angels in the Bible.

Gann Angels is a single chapter work on angels, looking at various aspects of angels in the Bible.

1. The study of “ANGELS” is a fascinating study. For the angels are primarily the ministers of God’s providence. The scriptures have much to say about angels. Yet, today there is a very general disregard for the subject.
2. Actually, members of the church of the Lord, generally speaking, give little or no thought for the subject. Many brethren have never heard a sermon, or studied a lesson regarding the subject of “angels.”
3. With many, the subject of angels is a question of myth or reality. Some questions that naturally arise relatiave to angels include the following:
a. What is the origin of angels?
b. What is the state or form of angels?
c. What are the attributes of angels? Their mission? Their destiny?

I. THE ORIGIN OF ANGELS

1. Relative to the origin of angels, God asked Job: “Where was thou when I laid the foundations of the earth? Declare, if thou hast understanding. Who hath determined the measures thereof, if thou knowest? Or who stretched the line upon it? Where upon were the foundations thereof fastened? Or who laid the corner-stone thereof, When the morning stars sang together, and all the sons of God shouted for joy” (Job 38:4-7).
The “sons of God” shouted for joy when God laid the founations of the earth, but Adam was not created until the sixth day of creation. Who, then, were those sons of God? Without doubt, they were angels.
2. Angels, however, were not in the beginning and thus from eternity. For instance, Neh. 9:6 reads “Thou art Jehovah, even thou alone; thou hast made heaven, the heaven of heavens, with all their host, the earth and all things thereon…” (Neh. 9:6).
In short, Jehovah made or created the “host” of angels. Psa. 148:1-14 indicates that God created all– that is, the host– and then called upon the whole creation to praise him. The reading is as follows: “Praise ye Jehovah. Praise ye Jehovah from the heavens: Praise him in the heights. Praise ye him all his angels: Praise ye him, all his host. Praise ye him, sun and moon: Praise him, all ye stars of light. Praise him, ye heavens of heavens, And ye waters that are above the heavens. Let them praise the name of Jehovah; For he commanded, and they were created” (Psa. 148:1-5).
Emphasis should be placed on the fact that there were no angels until Jehovah commanded, and then they were created.
3. The apostle Paul wrote: “For this cause I bow my knees unto the Father, from whom every family in heaven and on earth is named,…” (Eph. 3:14-15). This scripture affirms that God has a family. It also affirms that part of the family is in heaven, and part is on earth. The family in heaven also consist of angels– of created beings.
4. Further, the author of Hebrews wrote: “…but ye are come unto mount Zion, and unto the city of the living God, the heavenly Jerusalem, and to innumerable hosts of angels, to the general assembly and church of the firstborn who are enrolled in heaven, and to God the Judge of all, and to the spirits of just men made perfect, and to Jesus the mediator of a new covenant, and to the blood of sprinkling that speaketh better than that of Abel” (Heb. 12:22-24).

Remaining points without their information

III. STATE OR FORM OF ANGELS

IV. THE ATTRIBUTES OF ANGELS