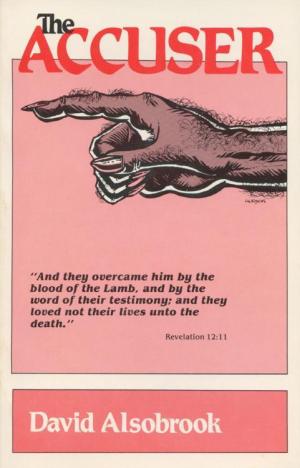 Alsobrook The Accuser is a 4 chapter work on various of Satan’s devices to get us to sin and entangle ourselves in the kingdom of Satan.

Contents of the Accuser

The Accuser is Muzzled by the Advocate Jesus, Our Intercessor
Satan Accused Simon and Demanded to Have Him
The Blood of Sprinkling

Judge NOT According to Appearance
Am I My Brother’s Keeper?
Judge Not.. But Judge

Wiles of the Devil Study Series

These study series are examinations into the ploys and traps that Satan uses to cause us to go deeper into his power and kingdom of sin.

Brooks work is a very large work on many of the deceptions and traps of Satan.

Although he was a Puritan and it would seem he is out of touch of modern life today, his reasonings reach down to our daily lives in a very strong way to help the Christian today defend his faith against Satan's attack.

It is an intensive work on these wiles of the Devil.

Go to this Brooks Precious remedies against the Devil's Devices. theWord format

or Read online Brooks Precious remedies against the Devil's Devices.

Our opponent, shrewd and subtle as he is (Genesis 3:1), is not confined to one role or method of attack. A survey of the Scriptures reveals many kinds of operations against the people of God. If they successfully defeated the adversary in one of his schemes, he would come against them at a later time with another tactic. Jesus exhorted His followers to be “wise as serpents”; Matthew 10:16 shows that serpents do have a substantial level of intelligence.
As I studied the Word to find out more about the enemy of whom Paul said we are not to be ignorant (I Corinthians 2:11), I slowly became aware that Satan has three primary roles of attack against the believer. If one method does not succeed against a Christian, often another form of attack will succeed. These three primary roles are: (1) The Tempter; (2) The Deceiver; (3) The Accuser.

The first time we see Satan approaching mankind he comes to our first parents in the role of the tempter. The serpent tempted Eve with, “Yea, hath God said. . . ?”

(Genesis 3:1). It was in this role that our Lord Jesus encountered him in their first recorded confrontation.
“And when the tempter came to him, he said, If thou be the Son of God. . . ” (Matthew 4:3). Evidently the early Christians were aware of this term, tempter, and this tactic also, for Paul wrote: “For this cause, when I could no longer forbear, I sent to know your faith, lest by some means the tempter have tempted you, and our labour be in vain” (I Thessalonians 3:5).

Although the tempter’s attacks are very real and sometimes successful in defeating a believer, temptation is the devil’s first method of attack and actually the weakest of the three primary roles he uses in assaulting the Christian. Jesus easily overcame this role with single quotations of solitary sentences from the book of Deuteronomy. He did not use a lot of Scripture when the tempter came against Him. Single stabs with the Sword of the Spirit defeated all three areas of temptation the devil brought against Jesus.

Far more believers are harmed by the adversary when he comes as the deceiver than they are when he comes as the tempter. This is a higher realm of attack and much more subtle than the previous one. Paul was referring to this second method in II Corinthians 11:14-15 when, after shocking them with the fact that many of their apostles were actually false, he said, “And no marvel [surprise]; for Satan himself is transformed into an angel of light.
Therefore it is no great thing if his ministers also be transformed as the ministers of righteousness; whose end shall be according to their works. ”

The purpose of coming to a person in the role of the deceiver is to trick that individual into accepting the false for the true. I personally know not a few ministers who have been deceived into great errors. Some of these men have seared their consciences with moral error after “a revelation from God” convinced them that we should have concubines today. Others have not brought as great shame as this upon the name of Christ, but have made their ministries invalid through teaching twists of Scripture.

The deceiver delights in distorting the truth of the Word, and he showed this in Matthew 4:6 when he twisted the clear meaning of Psalm 91:11-12. Our Saviour was not fooled by this trick. Even Satan can haphazardly quote (usually he misquotes) the Scripture.

What then is our safeguard against this form of attack?

After I sought the Lord earnestly along this line, He showed me: A believer overcomes the tempter with simple confessions of God’s Word. Jesus used only one sentence of Scripture to rebuke the tempter. On the other hand, a believer can overcome the deceiver only by studying the whole counsel of God’s Word and rightly dividing the Word by interpreting Scripture with Scripture.

I have come to the conclusion that each Christian must work out his/her own salvation and not rely entirely upon the experience of others. Every person has his/her own set of problems and areas of weakness to overcome. He that sat upon the throne said, “He that overcometh shall inherit all things; and I will be his God, and he shall be my son” (Revelation 21:7). The deceiver delights in taking a part of the Word and emphasizing it to the exclusion of other Scripture. Fortunately, many of us stay balanced in the Word sufficiently enough that the deceiver’s appearance as an angel of light does not fool us.

Most of you reading these words have known the presence of the tempter and the approach of the deceiver.
When the enemy came to you in that first role, you were well aware of the temptation. When he came to you in the second role, as a deceiver you were soon aware of that attack, although it probably was harder to discern than the former approach.

We now come to the devil’s third, and I think, strongest form of attack. “The devil” is the Greek word diabolos and means, “One who prosecutes as in a court room; a slanderer. ” “Satan” primarily means “adversary” and secondarily means “accuser—one who resists. ” This role as the accuser is probably the hardest to discern and overcome. Often we unknowingly become tools through whom the accuser can work.

When Satan appears as the tempter, his presence is very obvious. When he comes as a deceiver, his presence is usually not quite as obvious. However, when he comes as the accuser, we sometimes not only fail to discern Satan’s voice, we may even mistake it for the voice of God! At that point we are deceived and most likely will yield to the temptation to pass carnal judgment on a fellow believer.

Thus, we are snared by all three roles of attack: tempter, deceiver, and accuser.

How the Accuser Operates

We have found three ways that Satan operates as the accuser:

After Satan accused Job to God, he accused God to Job (through Job’s wife).

“Then Satan answered the LORD, and said, Doth Job fear God for nought?” (Job 1:9). Twice the devil told God, “Job will curse You to Your face” (see Job 1:11; 2:5). Then we see that the devil used Job’s last living family member to accuse God to Job: “Then said his wife unto him, Dost thou still retain thine integrity? curse God, and die” (Job 2:9).

2) Satan accuses other Christians to a believer.

Sadly, we often fail to discern this. We look upon a brother in the Lord and immediately judge him by the eye.
This is what Jesus referred to as “an evil eye, ” which is grouped along with adultery, fornication, murder, etc. (see Mark 7:19-24). This operation accounts for the great amount of suspicion, distrust, faultfinding, and criticism which exists within the body of Christ.

3) Satan accuses a believer to himself.

Even after a believer exercises true repentance over a sin and sincerely asks the Lord to forgive him, the accuser will attack with condemnation and guilt. Often I pray with Christians who have lived with guilt and burdens of condemnation for years and years. How happy I am to show them it is Satan who condemns them and not God.

Throughout the rest of this book we will refer to overcoming these three attacks of the accuser in a more applicable way. They will be referred to as follows:

Overcoming Satan when he accuses me to God and God to me.

Overcoming Satan when he accuses others to me, and me to others.

3) Overcoming Satan when he accuses me to myself.

More Works in theWord for Accuser of the Brethren

Alsobrook The Accuser is a 4 chapter work on various of Satan's devices to get us to sin and entangle ourselves in the kingdom of Satan.