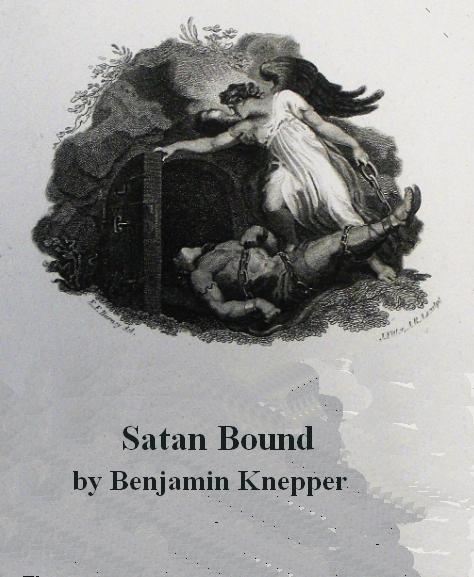 Knepper-Satan bound; or Resurrection, judgment and the happiness of the future world considered. This is a 11 chapter work on Satan and what will happen to him, and what he does.

Knepper-Satan bound; or Resurrection, judgment and the happiness of the future world considered. This is a 11 chapter work on Satan and what will happen to him, and what he does.

Satan Bound: or RESURRECTION, JUDGMENT AND THE HAPPINESS OF THE FUTURE WORLD CONSIDERED.

The design of this little volume is not to write what others have written long before, as is some times the case in works of this kind; but to give an entirely original explication Of the last three chapters of St. John’s Revelation. This being the case, as a matter of course, some of the most general views, especially about the Millennium, concerning which so much is said and written, must be dispensed with, and others taken in their place. On this account naturally some things will at first appear strange to the reader, but notwithstanding this, the author asks a careful perusal of the whole work, and then to ask, not how does it accord with my own, as well as the views of others, but how does it accord with the word of God.

This little volume was first written in German, not with the intention of having it published, but only for the author’s own satisfaction, for the so- called Millennium has been a subject of his study for a number of years, and after all, by reading all the writings On that subject that could be procured, the desired satisfaction was not obtained.

Thus, after having discussed the subject with a certain minister, for the greater part of a day, but without any conclusive satisfaction, the resolution was formed, by the aid of God’s word, and prayer for the teachings of the Holy Spirit, to try to mark out a way from this world to ” the world to come,” without getting entangled in the millennial difficulties, which has hitherto always been the case. After the desired end was gained, at least as far as the author’s own satisfaction was concerned, the main ideas were given to an intelligent friend, who urged the publication of them in a volume. Another friend suggested the propriety of having it written and published in the English language, as “Young America” would derive no satisfaction from a German work.

Upon these encouragements the author under took the task to re-write the whole in English from the German, and now, with the sincere desire that the blessing of God may accompany this little production of a good deal of study and care, wherever it finds its way into a family, the author submits it to the public and for the benefit of all its readers.
Wellersburg,
June 22, I860.

More Works on Satan and Demons

The Benjamin Knepper photograph above is from the Reverend. Earl Gindlesperger’s 1941 book " The Wills Creek Charge”. Page 11 and page 12 of that book provide a detailed biography of Rev. Knepper.

Rev. Knepper was locally well known in his day, and appears in many accounts of various Somerset County, Pennsylvania familes. The 1906 three volume book set "History of Bedford and Somerset Counties Pennsylvania" reports the following on his life: "There have been some long pastorships in Somerset county, but that of Benjamin Knepper would stand out as a remarkable one in the history of any denomination. Entering the ministry in 1846, he became pastor of the charge of which Wellersburg was the natural center. Although his career as a minister continued for forty-nine years, he never had but this one charge, serving it until he had almost become a nonogenerian. During his long pastorship, he baptised 2,329 persons, confirmed 945, married 466 couples, and officiated at 766 funerals. Rev. Knepper was born in 1816 and died in 1906.". Volume 3, pages 42-46 of that book set has an extensive Knepper family history that includes additional information on Benjamin.

A June 28, 1896 article in the New York Times stated “The Rev. Benjamin Knepper completed on Thursday, June 18, his fiftieth year as pastor of the German Reformed Church at Wellersburg, Penn. According to the rules of this denomination, the half century as pastor of one church entitled Mr. Knepper to be placed on the retired list. Thursday evening fully 1,000 people turned out to do honor to the occasion. Twelve ministers of the same denomination were present and participated in the ceremony. The Rev. Mr. Knepper’s record shows that he has baptized 2,440 persons, officiated at the funerals of 1,200, and married 1,100 couples. He has been one of the most prominent ministers of his conference.”.

The 1949 book “The Genealogy of Michael Korns, Sr. of Somerset County Pennsylvania ” states “The religious life of the Germans in Southampton Township, Somerset County was not overlooked. Nor was the need for a proper place in which to worship, for the Wellersburg Reformed and Lutheran Church was organized about 1803, among the earliest members were: the Korns, Uhls, Hoymans, Witts, Wilhelms, Reichers, Wingers, and Gaumers. The Reverend Benjamin Knepper had served that congregation continuously for almost half a century. He conducted his service and delivered his sermons in German during the early years, later in English.”.

Sample Chapter VIII. The Judgment of the Wicked

CHAPTER VIII. THE JUDGMENT OF THE WICKED.

Now comes up a new scene in which John saw,
1. ) A great white throne and him that sat upon it.
2. ) The dead great and small, standing be fore the throne.
3. ) Books opened and those standing before the judge.
4. ) That all those that appeared at this judgment came under the sentence of the second death, as ” they were cast into the lake that burneth with fire and brimstone.” Verses 11- 15.

with the words of Jesus (Matt. 25:31), when he said: ” When the son of man shall come in his glory, then shall he sit upon the throne of his glory.” In the next place, it is said: “From whose face the earth and the heavens fled away.” Now, in reference to the witness in judgment of the wicked, it is said in Job 20:27, ” The heaven shall reveal his iniquity, and the earth shall rise up against him.”

In reference to the judge, who shall sit upon the throne of his glory, it is said here, ” that heaven and earth shall flee,” for ” he is all and in all.” Col. 3:11. Heaven and earth have nothing to say to his sentence, and every thing is said to flee, and nothing but Jesus and righteousness can remain in this judgment. To this the Apostle Paul alludes, when he says of Christ the Judge, that God had raised him from the dead, and set him at his own right hand, far above all principality, and power, and might, and dominion, and every name that is named, not only in this world, but also in the world to come. Eph. 1: 20-23. Thus it might well be said, that, before him who sat upon the throne, heaven and earth shall flee away.

And I saw the dead, great and small, standing before the throne, to be judged out of the

books that were opened. Those seen here are such as have been dead ; for they are twice termed dead ; but now they were alive. For they are said to stand before the throne to be judged, of which living beings only are capa ble. That none who had no part in the first resurrection will escape this judgment, appears from the following words : “And the sea gave up the dead which were in it, and they were judged every one ;” thus none were excepted who appeared at this judgment, verse 18. Further it is said: “Death and hell,” (“Hades,” place of departed spirits) ” delivered up the dead which were in them;” that is, Hades, filled with subjects brought there through death, shall now be emptied of its inmates, thus give up the dead that were in it, and now shall death and hell be cast into the lake that burneth with fire and brimstone; and thus, as the last enemy death is overcome (1 Cor. 15:26), no place for the dead, or no ” Hades” is necessary any more, as the righteous have already entered into eternal life, and the ungodly, who were reserved unto the day of judgment, (Job 21:30; 2 Peter 2:4,) are now cast into the lake of fire, where their abode will be forever, to be tormented, no more to die, verse 10. In view of

these considerations it might well be said, that death and hell (regions of the dead) shall be cast in the lake that burneth with fire and brimstone, which is also called ,” the second death.” Then those whose names are not found in the book of life, will also be “cast into the lake of fire.”

At this last occurrence described in verses 11- 15, we do not find one whose name is written in the book of life, and thus all involved in this occurrence are cast into the lake of fire ; and all those who wish in this section to find a general judgment and salvation of the righteous described, seek for something which is not in it ; for the resurrection unto life which shall be experienced by the Christian has been described already in verses 1-5.