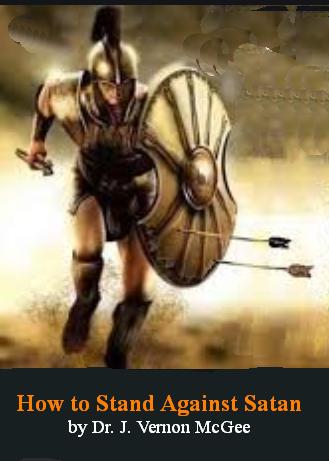 McGee-ttb-How to Stand against Satan is a single chapter work on Satan and standing against him. Put on God’s Panoplia, always praying.

McGee How to Stand against Satan is a single chapter work on Satan and standing against him. Put on God’s Panoplia, always praying.

Although this is a short work, it is by a very well known evangelist, and should be studied.

McGee-ttb-How to Stand against Satan is a single chapter work on Satan and standing against him. Put on God’s Panoplia, always praying.

McGee became the pastor of the Church of the Open Door in downtown Los Angeles in 1949, succeeding Louis T. Talbot (1889 - 1976). That same year, McGee gave one of the daily invocations at Billy Graham's two-month-long Christ for Greater Los Angeles Campaign.[10] In 1952, McGee was asked by evangelist and university president John Brown, owner of KGER radio station (now KLTX) in Long Beach, California, to take over a radio program (started in 1950 by fellow young-Earth creationist Harry Rimmer, whom McGee admired) to which listeners could send in questions that were answered on the air.[11]

By 1955, McGee had a well-publicized break with the Presbyterian Church, in which he claimed the church's "liberal leadership [had] taken over the machinery of the presbytery with a boldness and ruthlessness that is appalling."[12] This Fundamentalist–Modernist controversy within the Presbyterian church had been growing since the 1920s. It was during this time that a large number of nondenominational evangelical Protestant churches, such as the Moody Church in Chicago, had begun to appear across the U.S. After retiring from the pastorate at the Church of the Open Door in 1970, McGee devoted his remaining years to the Thru the Bible Radio Network. He also served as chairman of the Bible department at the Bible Institute of Los Angeles[13] and as a visiting lecturer at Dallas Theological Seminary.

Through an ancestor from Scotland, Thomas McGehee (1645-1717), McGee was the sixth cousin of John R. Rice, a fellow fundamentalist and baptist evangelist and pastor.

In 1967, he began broadcasting the Thru the Bible Radio Network program. In a systematic study of each book of the Bible, McGee took his listeners from Genesis to Revelation in a two-and-a-half-year "Bible bus tour," as he called it. He had earlier preached a "Through the Bible in a Year" series of sermons, each devoted to one chapter of the Bible, at the Church of the Open Door.[14] After retiring from the pastorate in January, 1970, and realizing that two and a half years was not enough time to teach the whole Bible, McGee completed another study of the entire Bible in a five-year period. At the time of McGee's death, the Thru the Bible program aired in 34 languages, but has since been translated into over 100 languages. It is broadcast on Trans World Radio throughout the world every weekday.

As a Christian fundamentalist, McGee advocated young-Earth creationism in his Thru the Bible broadcasts, with a literal interpretation of the Bible in which, for example, he considered the six days of creation mentioned in the Book of Genesis to be referring to actual twenty-four-hour-long periods of time.[15][16] Recurring themes in the TTB broadcasts were the Protestant doctrines of Sola fide (salvation through faith alone) and [absolute] assurance of salvation, or eternal security, which proclaims that once a follower sincerely accepts Christ as personal savior, there is nothing they can do, no sin they can commit, that will forfeit their salvation,[17] a belief held by the majority of Evangelicals and Fundamentalists.

McGee also frequently referenced select Bible passages in his sermons, such as Galatians 6:7 (Do not be deceived: God is not mocked, for whatever one sows, that will he also reap), and he often spoke of the days of societal apostasy in Christianity and secularism that he believed he was witnessing during his lifetime, warning that spiritual apostasy was always the first of the three stages leading to the fall of nations, commonly observed throughout the Bible, the second and third being, respectively, immorality and political anarchy.[18]

Conservative religious culture had begun to fall out of favor in America after World War II and did not regain wide-scale popularity in the country until the rise of Christian right movements such as the Moral Majority in the 1980s. Frequently in TTB broadcasts, McGee would tell anecdotes, many from personal recollection, about prominent evangelical Christian ministers from the past, such as G. Campbell Morgan, Lewis Sperry Chafer, Mel Trotter, and Dwight L. Moody and some of his successors at the Chicago Moody Church, such as R. A. Torrey and Harry A. Ironside. The continued success of the long-running TTB program has been attributed to McGee's oratorical abilities, folksy manner, and distinctive accent, as well as his insistence on maintaining the original mission, which was to spread the Scriptures with consistency of message.[19] Beliefs, teachings, and writings Having received his advanced degrees from the Dispensationalist Dallas Theological Seminary, McGee was a Christian fundamentalist.

Many Bible colleges were modeled after the Moody Bible Institute in Chicago. Dwight L. Moody, whom McGee often spoke of in his sermons, was influential in preaching the imminence of the Kingdom of God, which is important to Dispensationalism. In his preaching, McGee readily voiced his personal convictions regarding many controversial subjects. He held the belief that Premillennialism is the proper interpretation of Revelation 20:1–3, 7–8, regarding the end times prior to the final judgment. McGee expressed his disbelief in any validity to the view of Amillennialism, which was the dominant view of the Protestant Reformers and is still held by the Eastern Orthodox and Roman Catholic Churches.[20][21]

McGee opposed the viewpoints of Fatalism and Predestination in Calvinism.[22][23] McGee, like the majority of Protestants, vehemently rejected the Roman Catholic Church's doctrine that Saint Peter went to and founded the Church in Rome but, rather, McGee asserted in many sermons this had been done by Paul (Saul).[24] Because Protestants reject the claim by the Roman Catholic Church that it is the original Christian faith, founded by Jesus Christ, and its bishops are the successors of Christ's apostles (the pope being the successor to Saint Peter), McGee often argued for the distinction to be made between the Catholic Church and the Early Church, particularly in regards to the latter's role in developing the New Testament of the Bible [25]. McGee was a frequent and popular summer conference speaker at the Cannon Beach Christian Conference Center in Cannon Beach, Oregon.[26]