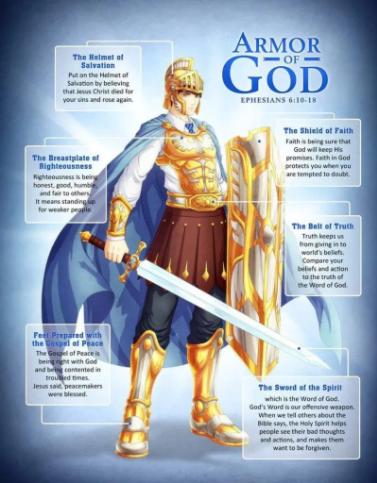 Murray’s work, The Christian Armour, was written as Europe was in turmoil and war. He sees parallels between the world of his day (politically and the war perspective) and this passage of Scripture. Murray’s main focus in on the spiritual warfare. Note that this is an inspirational/motivational work that has a few verses each chapter, and the author launches into exhortations from them. This is not high expositional work then.

Murray Christian Armour, was written as Europe was in turmoil and war. He sees parallels between the world of his day (politically and the war perspective) and this passage of Scripture. Murray’s main focus in on the spiritual warfare. Note that this is an inspirational/motivational work that has a few verses each chapter, and the author launches into exhortations from them. This is not high expositional work then. Murray Christian Armour

The Christian Armour: Being Studies in Ephesians 6:10-18 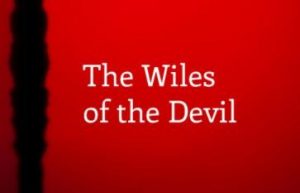 Wiles of the Devil Study Series

These study series are examinations into the ploys and traps that Satan uses to cause us to go deeper into his power and kingdom of sin.

Brooks work is a very large work on many of the deceptions and traps of Satan.

Although he was a Puritan and it would seem he is out of touch of modern life today, his reasonings reach down to our daily lives in a very strong way to help the Christian today defend his faith against Satan's attack.

It is an intensive work on these wiles of the Devil.

Go to this Brooks Precious remedies against the Devil's Devices. theWord format

or Read online Brooks Precious remedies against the Devil's Devices.

More Works on the Wiles of the Devil

IV. THE ARMOUR OF LIGHT
taken from Murray Christian Armour

“ The night is far spent, the day is at hand: let us therefore cast off the works of darkness, and let us put on the armour of light. “—Romans 8:12.

WE have seen that we are called to take our part in a world-wide war. Whatever form the ﬁght may take, whether with machine-guns, bombs, and hand-grenades in the trenches, or with patient, watchful, resolute self-discipline in the citadel of our inner life, the ﬁght is spiritual, that is personal. It is the man behind the gun that counts in the trenches. It is the man in us, “the inner man,” that counts in the battle with temptation. The Armour, therefore, that we need for the battle of life must in like manner be spiritual. In one word, it is character.

THE EFFECT OF CHARACTER

We have not far to look for an illustration of this fact. Watch what happens when a body of young men, like the freshmen at a University, have to face life for themselves for the first time, or when, as in war time, men of all ages find themselves confronted by new situations. Old habits are suddenly broken off, old companions left behind. Everyone has to face new work with a new set of associates and new temptations.

THE ARMOUR OF LIGHT 25

At ﬁrst everyone is at sea. But soon the mass begins to sort itself. Differences of brain power show themselves. Some are quicker than others in picking up a new job, or a new subject of study. They master it, and see how to apply its principles for them selves. Others feel lost and dazed, and always want someone to tell them what to do.

Again, some stand out as leaders. Their companions wait to know what line they will take, before doing anything themselves. Others stand outside the stream, and go their own way regardless of what the rest of the world is saying or doing. These differences are not in the brain, but in will power. And strength of brain and strength of will do not always go together. A man may be clever, yet always take his tone from the company in which he ﬁnds himself. He may describe himself justly as a man whom it is no use trying to drive, and really be an ass.

There is yet another direction in which, sooner or later, differences appear. Some keep straight all the time. Their faces are set in the right direction. They come out of the trial better men than they went in; perhaps with a poorer opinion of themselves; certainly, if they have made mistakes and learnt to correct them, with wider sympathies and greater power to help others. Others in various degrees go wrong. They are unmistakably worse at the end of the trial than they were at the beginning.

Here again the line of cleavage cuts clean across the lines we have already noticed. There are clever men and strong men on both sides of it, as well as men naturally dull and insigniﬁcant. The deter mining factor in this, the ultimately decisive direction, is not strength of brain or strength of will, it is moral strength. The armour of light that a man

needs if he is to overcome in the battle of life is Character.

CONSCIENCE THE SECRET OF CHARACTER

What, then, is the secret of character? On one side it is quite simple. Our last Study has put it into our hands. No man can win through this ﬁght whose face is not set in the right direction. It is not enough to wish no harm to anyone. It is rare to ﬁnd a man deliberately choosing evil. No man can keep straight, unless he forms and resolutely maintains the habit of asking himself before he comes to any decision, not Is this the easiest or most popular thing to do, or the thing that will bring me most pleasure or proﬁt? but Is this my duty? The world is possessed by a will to pleasure or a will to power. We can only escape being enslaved to it by resolutely devoting ourselves to the will to right.

This, notice, is what St. Paul teaches in our text. He is calling the Christians of his own day “ to give up making provision for the ﬂesh, ” to give up, that is, living for their own pleasure, and to live instead in the realized presence of God, Who, as he and they believed, would in their generation make a public manifestation of His salvation. To do that was ” to cast away the works of darkness and to put on the armour of light,” or, as he expresses the same thought in the closing words of the passage, “ to put on the Lord Jesus Christ.” And his words have a present application. If men were living then in a time when God was going by most startling judgments to waken them out of sleep and force them to reap the fruit of their forgetfulness of Him, we who have had eighteen centuries of practice in reading the signs of His appearing, should need no elaborate

THE ARMOUR OF LIGHT 27

argumwt to convince us that “ our salvation is nearer to us to-day than when we ﬁrst believed. ”

If so, there are three points to which we shall do well to give heed. First this: The way to arm yourself for the ﬁght is to obey your conscience. To follow the guidance of the light that lighteth every man is in itself an equipment for battle.

For they follow the light that lighteth every man, and that light, whether a man knows it or not, is Christ.

We, who profess and call ourselves Christians, will do well to lay this fact to heart. To face it resolutely is the ﬁrst sign that we are awaking from our slumber, and are at least not afraid to come to the light, that it may show us what evil we must put away before we can don our armour.

YOU CAN, IF YOU WILL

My second point is this: No one can excuse himself from undertaking this task by saying that he is too stupid or too weak. The line of cleavage between those who set their faces to do right and those who do not, runs, as we have seen, right across the distinctions between the bright and the dull, the commanding and the insigniﬁcant. A clever man may be a rogue. A strong man may set himself to do evil “ with both hands earnestly,” while a man who knows himself to be a fool and a weakling may set himself to do right. He is what God made him, and God will help him to make the best of himself. It is surprising what quiet strength and wisdom such a man develops in God’s Hands. God often chooses the foolish things of this world to confound the wise, and the weak and contemptible to abase the strong.

CHRIST CAN MAKE A MAN OF YOU

My last point is this: As the light is Christ, so is the Armour. The will to good, with which we identify ourselves when we choose the good, is a real will. The power not ourselves making for righteousness, both in this world without and in our hearts within, has been manifested in Jesus Christ. He is only waiting for our consenting will to possess us wholly. In the light of that thought we grasp what is meant by the fact that in our baptism we put on Christ, and that in Holy Communion we feed on the Body with which He was clothed, that He might do His Father’s will. Faith in Christ has in it the secret of character. If you are a Christian, you can hope to be a man.

THE ARMOUR OF LIGHT 29

It was said of Frederic Denison Maurice, “ He always impressed me as a man who was naturally weak in his will; but an iron will seemed to work through him.”

0 living will that shalt endure
When all that seems shall suffer shock;
Rise in the spiritual rock,
Flow thro’ our deeds and make them pure.

Murray's work, The Christian Armour, was written as Europe was in turmoil and war. He sees parallels between the world of his day (politically and the war perspective) and this passage of Scripture. Murray's main focus in on the spiritual warfare. Note that this is an inspirational/motivational work that has a few verses each chapter, and the author launches into exhortations from them. This is not high expositional work then.