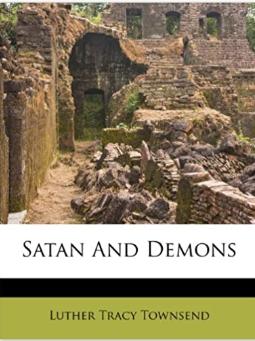 Townsend wrote Satan and Demons, and its 12 chapters deals with Demonism in the Bible (both Satan and his demons). It explains demon possession and some practical points of God allowing Demons on mankind like a disease.

Townsend wrote Satan and Demons, and its 12 chapters deals with Demonism in the Bible (both Satan and his demons). It explains demon possession and some practical points of God allowing Demons on mankind like a disease.

“For the invisible things of him from the creation of the world are clearly seen, being under stood by the things that are made.”—Paul.

“Woe to the inhabitants of the earth and of the sea! For the devil is come down unto you, having great wrath, because he knoweth he hath but a short time.”—John.

“Are we sure that all our discoveries respecting the spiritual world within us may not be appealed to in confirmation of a new demoniac system 7”—Frederic Denison Maurice.

“No one who acknowledges demoniacal things can deny demons.”—Ralph Cudworth.

CONTENTS of Townsend Satan and demons

II. 1. THE BIBLE AND DEMONISM-SATAN.

III. 2. THE BIBLE AND DEMONISM-DEMONS.

The Creator’s purpose – Belief in demons widespread and persistent—The moral argument the same as for the Divine existence and immortality—Why have men believed in Satan and demons?—Why did Christ and his disciples believe in demonism?–Scientific conclusion 42

Experimental psychology—One mind can influence another—If good angels and the Holy Spirit can influence humanity, why can not Satan?—Psychic research and the invisible world 66

Difficult questions—Several propositions as to God’s relation to demonism—God is ruler — Satan and demons not eternal, innocent when created, became sinful by yielding to temptation—The tendency of sin is towards more sin, and if long continued, no reform is probable—Sin limits power and entails deformity–Satan and demons limited in range and power— Their kingdom a confederacy—Possible method of communication suggested by recent discoveries 72

IX. 1. CHRIST AND DEMONISM-THE BEGINNING OF SIN AND REJECTION of CHRIST.

The temptation—The command to worship the Logos—The rationale of the first transgression – Temptation resisted is beneficial, yielded to is sin–Opportunity to reform 83

The Creator arranges for all emergencies— Different methods of protection — Microbes, harmless and malignant—Difference in health and disease — Helpful bacteria 107

Luther Tracey Townsend I have not been able to find much information on Townsend yet. One fact I did find is that he spoke at Wheaton College in the 1880 commencement activities. He is listed as a theology professor. So that puts him the late 1900s as of living and in the Wheaton College orbit at that time. University of Pennsylvania's Online books has him listed, giving his birth and death dates. (1832-1922).