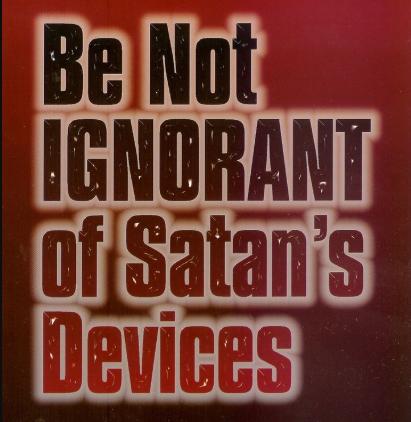 Whitefield-Satan’s Devices is a 15 page sermon (single chapter) theWord module which is a sermon by George Whitefield.

George Whitefield 27 December [O.S. 16 December] 1714 – 30 September 1770), also spelled Whitfield, was an English Anglican cleric and evangelist who was one of the founders of Methodism and the evangelical movement.[1][2]

Born in Gloucester, he matriculated at Pembroke College at the University of Oxford in 1732. There he joined the "Holy Club" and was introduced to the Wesley brothers, John and Charles, with whom he would work closely in his later ministry. Whitefield was ordained after receiving his Bachelor of Arts degree. He immediately began preaching, but he did not settle as the minister of any parish. Rather he became an itinerant preacher and evangelist. In 1740, Whitefield traveled to North America, where he preached a series of revivals that became part of the "Great Awakening". His methods were controversial and he engaged in numerous debates and disputes with other clergymen. In college, George Whitefield was a friend to the two Wesley brothers, Charles and John.

Whitefield received widespread recognition during his ministry; he preached at least 18,000 times to perhaps 10 million listeners in Great Britain and the American colonies. Whitefield could enthrall large audiences through a potent combination of drama, religious rhetoric, and imperial pride.[3]

The occasion of these words was as follows: In the church of Corinth there was an unhappy person, who had committed such incest, as was not so much as named among the Gentiles, in taking his father’s wife; but either on account of his wealth, power, or some such reasons, like many notorious offenders now-adays, he had not been exposed to the censures of the church. St. Paul, therefore, in his first epistle, severely chides them for this neglect of discipline, and commands them, “in the name of our Lord Jesus Christ, when they were gathered together, to deliver such a one, whoever he was, to Satan, for the destruction of the flesh, that his Spirit might be saved in the day of the Lord;” that is, they should solemnly excommunicate him; which was then commonly attended with some bodily disease. The Corinthians, being obedient to the Apostle, as dear children, no sooner received this reproof, but they submitted to it, and cast the offending party out of the church. But while they were endeavoring to amend one fault, they unhappily ran into another; and as they formerly had been too mild and remiss, so now they behaved towards him with too much severity and resentment. The Apostle, therefore, in this chapter, reproves this, and tells them, that “sufficient to the offender’s shame, was the punishment which had been inflicted of many:” that he had now suffered enough; and that, therefore, lest he should be tempted to say with Cain, “My punishment is greater than I can bear;” or to use the Apostle’s own words, “Lest he should be swallowed up with overmuch sorrow;” they ought, now he had given proof of his repentance, to forgive him, to confirm their love towards him, and to restore him in the spirit of meekness; “Lest Satan, (to whose buffetings he was now given, by tempting him to despair) should get an advantage over us:” and so, by representing you as merciless and cruel, cause that holy name to be blasphemed, by which you are called; “for we are not ignorant of his devices:” we know very well how many subtle ways he has to draw aside and beguile unguarded unthinking men.

Thus then, stand the words in relation to the context; but as Satan has many devices, and as his quiver is full of other poisonous darts, besides those which he shoots at us to drive us to despair, I shall, in the following discourse,

First, Briefly observe who we are to understand by Satan. And,

Secondly, Point out to you, what are the chief devices he generally makes use of to draw off converts from Christ, and also prescribe some remedies against them.

The below block takes a while to load.

Whitefield-Satan's Devices is a 15 page sermon (single chapter) theWord module which is a sermon by George Whitefield.