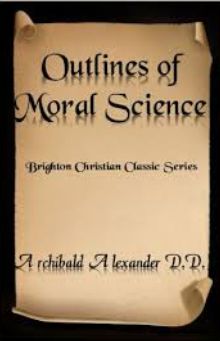 Archibald Alexander{s Outlines of Moral Science is a work about morality, and studies in virtue. Man, as a Creation of God, has a moral obligation to respond to God’s moral obligations upon man.

Archibald Alexander{s Outlines of Moral Science is a work about morality, and studies in virtue. Man, as a Creation of God, has a moral obligation to respond to God’s moral obligations upon man.

Chapter I. Conscience, or the Moral Faculty, 19
Chapter II. The Moral Faculty, Original and Universal, 27
Chapter III. A Moral Faculty Being Supposed, Whether its Dictates are Uniform, 30
Chapter IV. How Far all Men are Agreed in their Moral Judgments, 85
Chapter V. Whether Conscience is the same as the Understanding, or a Faculty Different from and Independent of it, 40
Chapter VI. The Moral Sense Compared with Taste, 44
Chapter VII. Moral Obligation, 48
Chapter VIII. The Supremacy of Conscience, 60
Chapter IX. Whether we Always do Right by Obeying the Dictates of Conscience? 64
Chapter X. Whether there is in the Mind a Law or Rule, by which Man Judges of the Morality of Particular Actions? 73
Chapter XI. The Moral Feeling which Accompanies Every Moral Judgment, 78
Chapter XII. Belief in God, as Connected with the Operation of Conscience, 84
Chapter XIII. Moral Agency, and What is Necessary to it, 89
Chapter XIV. Man a Moral Agent, 97
Chapter XV. Man not under a Fatal Necessity, 101
Chapter XVI. Man’s Direction and Government of his Actions, and his Consequent Responsibility, 107
Chapter XVII. Objections to the Uniform Influence of Motives, 117
Chapter XVIII. Summary View of Liberty, 125
Chapter XIX. The Kind of Indifference which has been Considered Essential to Free Agency, 182
Chapter XX. Whether Men are accountable for their Motives; or whether Desires and Affections which precede Volition, have a Moral Character? 186
Chapter XXI. The Division of Motives, into Rational and Animal, 141
Chapter XXII. Whether Morality Belongs to Principles as well as Acts, or is Confined to Acts Alone? 147
Chapter XXIII. Moral Habits, 155
Chapter XXIV. The Nature of Virtue, 159
Chapter XXV. The Nature of Virtue, Continued. Different Hypotheses, 171
Chapter XXVI. The Nature of Virtue, Continued, 184
Chapter XXVII. Whether Virtue and Vice Belong only to Actions? 199
Chapter XXVIII. The Author of our Being Considered in relation to Moral Science, 209
Chapter XXIX. The Phenomena of the Universe, 239
Chapter XXX. Duties of Man to the Creator as thus manifested, 255

Archibald Alexander{s Outlines of Moral Science is a work about morality, and studies in virtue. Man, as a Creation of God, has a moral obligation to respond to God's moral obligations upon man.
Gbk-encrypted