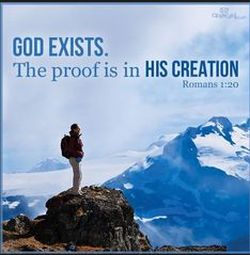 This module, on Creation and the Existence of God is taken from theHighway.com. It has 16 studies related to Crecreaation basically.

Creation and the Existence of God

Creation and the Existence of God
Various authors

This module, on Creation and the Existence of God is taken from theHighway.com. It has 16 studies related to Creation basically.


Table of Contents of Creation and the Existence of God

Creation and the Existence of God (Introduction chapter)

WHO MADE ALL THIS STUFF?

The evolutionists tell us that there is no God and that all life just happened. Darwin and his followers ask us to believe that, over many years, a one-cell animal evolved into a human being. This is despite the fact that there is no evidence at all that one species ever became another. Even if one would allow for all of this evolving, where did that first one-cell animal come from? Where did the earth and the stars come from? If, as modern science generally now believes, there was a big bang and the universe began, what caused that bang?
If we go back far enough and look for the “first cause,” we see only two choices. One, there is a self-existent God or two, there is a self-existent universe. In other words, either God created the universe or the universe is both its own cause and effect.

Many modern scientists expect us to believe that there was a self-existent universe and that one afternoon a mixture of gases and dust came together and BANG…the stars and the planets came into being.

Do you think that if there was a large explosion at a computer factory, the computer that you are at right now would have been created? Would it continue to improve itself over the years? If that were true, there would be a larger hard drive and a lot more RAM in my PC!
Just as we cannot imagine the modern computer being the result of a random explosion, it is just as unlikely that the universe was created as a result of a random big bang. It is also impossible that you could have evolved from a one-cell creature whose origins are unknown and unexplained. Even Darwin noted that he had problems understanding how the human eye could ever evolve.

There’s an explanation for all of this: God did it! You are not the product of chance – God made you. You didn’t just happen. He created you for a purpose. God doesn’t do things without a reason.

“He has made everything beautiful in its time. Also, He has put eternity in their hearts, except that no one can find out the work that God does from beginning to end.” (Ecclesiastes 3:11). We won’t have all of the answers while we are on this earth. But, God has plans for your earthly life and the life that you will live in eternity. “For I know the thoughts that I think toward you, says the LORD, thoughts of peace and not of evil, to give you a future and a hope.” (Jeremiah 29:11). How about considering taking a Journey?

Works on Creation or Evolution