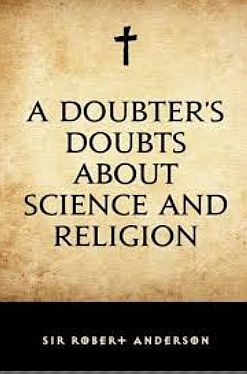 In this work by Anderson (Brethren), he deals with Science and Religion, and the doubts that some have about these topics.

Preface
Chapter I
How Did Life Begin?Creation or evolution? Method of the inquiry. The evidence for evolution. Abiogenesis. Huxley, Tyndall and Lord Kelvin quoted. Herbert Spencer cited in refutation of it. The original life-germ : its infinite capacities. Science leads to the acknowledgment of God. The alternative.

Chapter II
The Darwinian Theory Mark Twain quoted. “Who made God?” Lord Kelvin’s dictum — “Science affirms creative power.” What kind of God then shall we own? Darwin’s hypothesis. His statement of it. Degeneration as an alternative hypothesis. Evolution fails to account for the moral and spiritual nature of man. Herbert Spencer cited against it. A practical test. Karl von Hartmann on Darwinism.

Chapter III
Herbert Spencer’s Scheme Special creation versus evolution. Spencer quoted and answered. His mistakes as to theological difficulties. The biblical scheme for the restoration of creation. “No one ever saw a special creation.” Spencer’s theme atheistical.

Chapter IV
Have We A Revelation?The function of true scepticism. The existence of God creates a presumption in favour of a revelation. But we must guard against fraud and superstition. Is Christianity a Divine revelation? The question discussed. The claims of Rome and sacerdotalism. (Concluding note on Article XXVIII. and the meaning of a “sacrament”),

Chapter V
Is Christianity Divine?Goldwin Smith on the Reformation and the Bible. Notice of the theological school which ignores the connection between Christianity and Judaism. The testimony of Christ to the Old Testament. The Kenosis theology discussed.

Chapter VI
Mr. A. J. Balfour’s Scheme The theses of A Defence of Philosophic Doubt. Discussion of the scheme. Tyndall on “religious feeling.” The argument against miracles. The question discussed. The testimony of Scripture. Settling the issues. The conflict is between Scripture and scientific theories, not facts.

Chapter VII
The Cosmogeny of GenesisThe controversy on the subject. Mr, Gladstone’s Dawn of Creation and Worship. The failure of Mr. Huxley’s attack upon it. Their reference to Prof. Dana, and his decision. The author’s challenge to Mr. Huxley in The Times. Mr. Gladstone’s thesis holds the field. The materialistic scientists. Herbert Spencer’s statement of evolution. The teaching of Genesis i.

Chapter VIII
“An Agnostic’s Apology”Sir Leslie Stephen’s treatise. The fallacy of his scheme exposed. His method of discussion. Reference to Newman. His position is infidel. His challenge stated and answered by the Resurrection. The evidence for the Resurrection. Dr. Harnack’s view. The universality of superstition a proof of the truth of Genesis.

Chapter IX
The Irrationalism of Infidelity.Mill’s testimony to Christ. The untenableness of the infidel position. It is refuted by their own testimony to the New Testament writers. The miracle of feeding the 5,000. The evidence for such miracles is complete. Voltaire’s infidelity explained. The honest sceptic entitled to respect, especially in view of the religious apostasy of the day. Dean Alford on the Christian Church.

Chapter X
A Sceptic’s Plea For Faith.Lord Kelvin’s testimony and advice. Chrysostom’s testimony to the Scriptures. The “Catholic Church” and Pascal. What God demands of those who come to Him. The question discussed. The facts of Christianity attested by evidence. The crucifixion a proof that Christ claimed to be Divine. And this creates a presumption that we have authentic records of His ministry.

Chapter XI
How To Read The BibleProf. Max Müller’s testimony to the New Testament. Dr. Harnack’s testimony to its genuineness. How to begin Bible study. Lord Cairn’s words spoken to working men. “What is it about?” Prevailing errors about the Bible, “The Character and purpose of the Jewish dispensation, The Sermon on the Mount. The Lord’s testing about the Hebrew Scriptures. Dean Alford quotes, Getting Back to Christ.”

Chapter XII
The “Higher Criticism”The false distinguished from the true. The false a rationalistic crusade against the Bible. Eichhorn’s scheme. Astruc’s discovery. The German attack on the Pentateuch. The mistake made by English critics. The art of writing in the Mosaic Age. The Hammurabi code. Dr. Driver’s statement of the case against the Pentateuch. Disproved by the Samaritan Bible. Robertson Smith and Prof. König quoted. The problem one of evidence. The ”two Isaiahs” hypothesis. Jonah and the whale. The Kenosis figment explained and refuted. Dr. Driver’s position. The “New Theology.” Bishop of Durham quoted.

Note I. The Creation.
Note II. The Book of Daniel.
Note III. The Old Testament and the Critics.

SOME of the following chapters we printed in a volume a few years ago. It may be thought perhaps that the criticisms they contain are out of date, now that Spencer-ism is dead and Darwinism discredited. But though biological theories which reigned supreme a few years ago have been abandoned or modified by “men of light and leading,” their influence still prevails with the general public; and in response to appeals from several quarters I have reproduced the chapters in question.

The fact that A Doubter’s Doubts was published anonymously may indicate how little its author thought of it. But among many signal proofs that it was appreciated by others, the most important was Mr. Gladstone’s notice of it. And the circumstances in which the following letter was written lend to it a peculiar interest. The extracts from his diary, given in Mr. Morley’s Life of Mr. Gladstone, record that December 18, 1889, was the occasion of Parnell’s historic visit to Hawarden, and that the day was devoted to reviewing and reconsidering the whole Irish question, and discussing it with the Irish leader. And yet on that very day Mr. Gladstone found leisure to read my book, and to write to me about it. I should add that I had not sent it to him, nor was I aware that he possessed it.

More Works on Creation or Evolution

In this work by Anderson (Brethren), he deals with Science and Religion, and the doubts that some have about these topics.