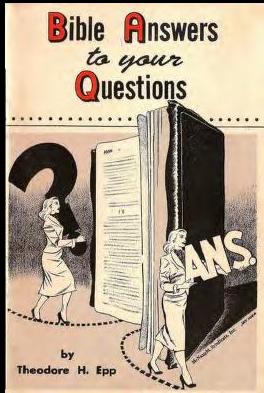 Epp-Bible Answers to Your Questions
by Theodore Epp

BIBLE ANSWERS TO YOUR QUESTIONS

by Theodore H. Epp
Back to the Bible Publishers
Box 233 Lincoln 1, Nebr.
Copyright 1958
by Good News Broadcasting Association, Inc.
1958
Printed in the U.S.A.

CONTENTS of Epp Bible Answers to Your Questions

The questions on the Bible which have been incorporated in this book were asked originally by members of the radio audience of the Back to the Bible Broadcast. The pastoral department has been answering these questions and others like them for years; and it is from their files that the questions have been gleaned.

For some time now, Rev. Richard M. Canfield who is head of the pastoral department, and Mr. Epp, have been dealing with these matters on the Friday broadcasts. Mr, Canfield asks the questions or reads the letters with the questions in them, and Mr, Epp answers them.

Widespread interest in these weekly sessions is evidenced by the large number of requests for the answers in printed form. Only a few of them could be given in a book of this size. What are here, however, we trust will whet the appetite of God’s people for further Bible study. According to the First Psalm the blessed man is the one who makes the Bible his counsellor and guide.

Does the Scripture contradict itself occasionally, or do you feel it can be harmonised?
How about Matthew 5:17-19 where Jesus says He is come to fulfill the law rather than destroy it, and Colossians 2:14, where Christ says that He nailed the ordinances of the law to the cross? If Christ refers to the Ten Commandments, isn’t Paul doing the same?

Most certainly these verses refer to the same law. Now then, in order to arrive at a correct answer, we have to understand that there is a time limit to the law of the Old Testament. For the moment we will not consider the matter of destroying the law and nailing it to the cross. Let us get this straight concerning the time limit of the law.

According to Galatians 3:17-21 God made a covenant with Abraham. He confirmed that

covenant, then 430 years afterward He added the law. He brought in the law, but in the same breath he tells exactly how long that law was to be in effect. Very clearly this is stated in Galatians 3:19. “Wherefore then serveth the law? It was added . . . till the seed should come. ” Because people were sinning, they needed the law to show them that they were sinning, and it was added “till the seed should come to whom the promise was made,” Now who is that seed that should come? You do not need to go outside the Bible to get it; it is right here in the 16th verse: “Now to Abraham and his seed were the promises made. He saith not, And to seeds, as of many; but as of one, And to thy seed, which is Christ,” God has made it very clear, then.

The Law a Schoolmaster unto Christ I want you to look at Galatians 3:24 for a moment. There are three words in italics that have sometimes confused us. In the King James Version, words in italics mean that those words were added by the translators to try to make the meaning clearer. Such words are not in the original manuscripts.

Sometimes however, they do not make a passage clearer, sometimes they confuse. In this case it is the latter.

Here is what Paul said, “Wherefore the law was our schoolmaster unto Christ,” The law is a schoolmaster, like a whip, unto Christ; until the time that Christ came. Now with that in mind, here is what I want you to see from Matthew, the 5th chapter. Jesus, then, was the Seed. The law was given until Jesus should come. Now does that mean when He was born or when He died? Jesus said, “Think not that 1 am come to destroy the law, or the prophets; [ am not come to destroy, but to fulfil. For verily I say unto you. Till heaven and earth pass, one jot or one tittle shall in no wise pass from the law, till all be fulfilled,” Using this Scripture some people have felt that the law must be in force today. Those who believe this are discrediting Christ for they are saying that He did not fulfill the law.

Christ Fulfilled the Low Not only did Christ keep the law but He fulfilled it in two ways. The law is in two divisions, the moral law and the ceremonial.

The moral law tells one how to live acceptably before God and prescribes a stiff penalty for disobedience. Jesus fulfilled every jot and tittle of that law. He did not do one solitary thing contrary to it. He claimed to fulfill it and when on the cross He said, “It is finished’’ that is what He meant. He also completed, or fulfilled, the second phase of the law which was called the ceremonial law. This was the law of the offerings all of which typified Christ. When He was crucified He was the Lamh of God which taketh away the sins of the world. He fulfilled every type of the ceremonial law.

So in the first case. He fulfilled the law to prove that He and He alone could actually keep it. No natural man ever has or ever can fully keep it. In the second case He died for us because we did not or could not keep the law.
Now as we turn over to Colossians 2:14 we find the same truth taught from another angle.

There is no more condemnation to them that are in Christ Jesus, for He blotted out the handwriting of ordinances or the law that was against us. The law was against us, for it said we must do right or die. Since we

could not keep it we must suffer the second death, eternal separation from God. Christ saw our hopeless condition and took the law out of the way by nailing it to the cross.

Does that mean then that I can live like a devil if I want to? That is not what it says at ail. In Romans, the 8th chapter, we learn that He having fulfilled the law, first of all, is now living to fulfill that law in our lives in the practical sense. He has already fulfilled it for our salvation, and what He did counts for us.

Theodore H. Epp (January 27, 1907 - October 13, 1985) was an American Christian clergyman, writer, and a radio evangelist. Epp was the founding director and speaker of the Back to the Bible broadcasts between 1939–1985, heard worldwide on eight hundred stations in eight languages.

Epp was born in Oraibi, Arizona, the son of Russian Mennonite immigrants.[2] His parents were missionaries to the Hopi Indians there. After graduating from Oklahoma Bible Academy, Epp attended Hesston College, Hesston, Kansas and the Bible Institute of Los Angeles (now, Biola University), Epp received a ThM degree in 1932 from Southwestern Baptist Theological Seminary in Fort Worth, Texas.

He started his ministry as a pastor and radio preacher in Goltry, Oklahoma and then relocated to Lincoln, Nebraska, where he established the Back to the Bible radio program.[2] It was first broadcast May 1, 1939, on a local station and was eventually syndicated as a daily, 30-minute program to more than 800 radio stations worldwide by the time of his retirement in 1985.

Under Epp's direction, the broadcasts were also noted for music by the Back to the Bible Choir and quartet. Several popular recordings were made by the choir in the 1940s and 1950s. Back to the Bible also had a weekly youth program, featuring a youth choir and serialized adventures with a Christian theme.[4] Both the music and youth program have since been discontinued. Epp wrote nearly 70 books and magazine articles.

Theodore Epp died in 1985 in Lincoln, Nebraska, and is buried at Lincoln Memorial Park there.[5] The Back to the Bible program he founded was led after his death on an interim basis by Warren W. Wiersbe, later followed by various successors. The program remains headquartered in Lincoln, Nebraska.