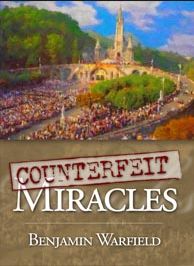 Warfield’s work, Counterfeit Miracles, explores the world of cultic and false religions in their fight to validate themselves and invalidate the rest of Christianity. They use miracles as this basis (as one point of attack) and Warfield explains why this linkage between miracles and validation before God as “the one true religion” is in itself invalid.

Warfield Counterfeit Miracles, explores the world of cultic and false religions in their fight to validate themselves and invalidate the rest of Christianity. They use miracles as this basis (as one point of attack) and Warfield explains why this linkage between miracles and validation before God as “the one true religion” is in itself invalid.

Table of Contents of Counterfeit Miracles

yaa.im is a another free cloud storage product with 20 GBs free. They delete your files 1 year after you stop adding or downloading them.