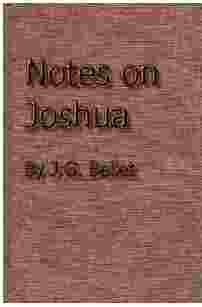 Bellett’s Notes on Joshua is an outline study of the book of Joshua.

Bellett’s Notes on Joshua is an outline study of the book of Joshua.

Contents of Notes on Joshua

“Our fathers had the tabernacle of witness in the wilderness . . which also our fathers that came after brought in with Jesus (Joshua) into the possession of the Gentiles, whom God drove out before the face of our fathers.” Acts 7. 44-45.