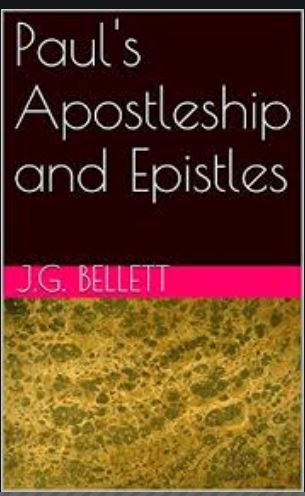 Bellett Pauls Apostleship Epistles is a 31 chapter survey of Paul’s writings, with some additional 17 chapters on related topics having to do with the life and ministry (apostleship) of Paul.

Bellett Pauls Apostleship Epistles is a 31 chapter survey of Paul’s writings, with some additional 17 chapters on related topics having to do with the life and ministry (apostleship) of Paul.

Tags within works on Bible Characters

Bellett Pauls Apostleship Epistles is a 31 chapter survey of Paul's writings, with some additional 17 chapters on related topics having to do with the life and ministry (apostleship) of Paul.
1. Pledges of Israel's Restoration
2. A Testimony to Israel
3. The Conversion of Paul
4. New Ministries Called Forth
5. Successive Stages in Revelation
6. The Apostleship of Paul
7. The Son Revealed in Saints
8. Paul's Stewardship
9. Life, Love and Glory
10. Paul's Gospel
11. Paul's Ministry
12. Christ, the Head of the Church
13. Gifts to the Church
14. The Holy Spirit's Presence
15. Responsibility in Ministry
16. Paul, a Representative Man
17. The Rapture into Heaven
18. Paul's General Epistles
19. Romans
20. 1 Corinthians
21. 2 Corinthians
22. Galatians
23. Ephesians
24. Philippians
25. Colossians
26. 1 and 2 Thessalonians
27. The Pastoral Epistles
28. 1 Timothy
29. 2 Timothy
30. Titus
31. Hebrews