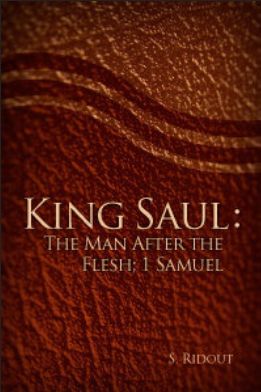 King Saul: the man after the flesh — 1 Samuel

Contents of King Saul: the man after the flesh — 1 Samuel

Prefatory Note and Introductory
Chapter 1. — The State of the People
Chapter 2. — The Captivity in the Philistines’ Land
Chapter 3. — God’s Care for His own Honor
Chapter 4. — God’s Mercy to His Humbled People
Chapter 5. — The People’s Desire for a King

Other Works on Saul

Tags within works on Bible Characters

Samuel Ridout's father died when he was only one his father died, and at age 5 his mother and his grandfather undertook to raise the boy. Of this devoted and godly
man, Mr. Ridout ever spoke in the highest terms of appreciation, and often
mentioned how greatly he was indebted to him for training in the nurture and
the admonition of the Lord. He determined to enter Princeton Seminary,
where he graduated in 1880.

He had a long ministry of 40 years. He followed F. W. Grant in the Editorship of "Help and Food," and was associated with him in the work of the Numerical Bible. He also wrote Sunday School classes for the Sunday School Visitor. For nearly 30 years he compiled the Treasury of Truth Almanac and Counsellor, and in the work of the Bible Truth Depot his help and counsel were ever a source of inspiration and comfort.