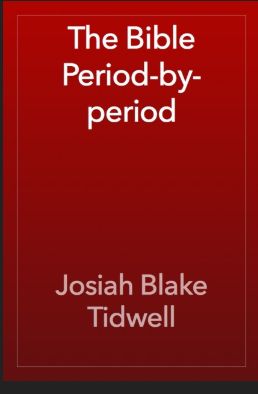 A MANUAL for the Study of the Bible by Periods such as From the Creation to the Fall, From the Fall to the Flood, Flood to Abraham, Abraham to Egypt, Egypt to Sinai, etc.

Tidwell Bible Period by Period A MANUAL for the Study of the Bible such as From the Creation to the Fall, From the Fall to the Flood, Flood to Abraham, Abraham to Egypt, Egypt to Sinai, etc.

Josiah Blake Tidwell states “Thou shalt love thy neighbor as thyself (Lev. 19:18). It is the final word in all right relations to others.” This statement in The Bible Period by Period, regarding the Laws of Moses, and echoed in the words of Jesus is the guiding principle by which Tidwell seems to have lived.

J. B. Tidwell was born in Alabama in 1870 to a modest family of farmers. He was educated at Alabama’s Howard College (now Samford University), earned a Master’s Degree from Baylor University in 1903, and did post-graduate studies through a correspondence program of the University of Chicago. He also received several honorary degrees. Tidwell served as the Chairman of the Bible Department at Baylor University from 1910 until the time of his passing in 1946. Among his writings are The Bible, Book by Book (1914), The Bible, Period by Period (1916), Genesis: A Study of the Plan of Redemption (1924), and John and His Five Books (1937).

This book, The Bible Period by Period (1916) is a companion to Tidwell’s The Bible Book by Book (1914). Both are college level introductory courses in Christian studies. They are each organized in outline form with question at the end of each chapter to guide the student in acquiring a comprehensive mastery of the material.

In preparing The Bible Period by Period in e-book format, the outline styles were edited for sake of e-text consistency and proofreading. Certain geographical place names were edited for consistent spelling. The rest of the text remains faithful to the original. For any errors in transcription, I sincerely apologize as the words of the author could hardly be improved upon.

A MANUAL For the Study of the Bible by Periods

Author’s Preface.
he author believes that the Bible is the word of God and that it is the inspired revelation of God’s will to men and of the plan which he has provided for their redemption. He believes that it contains instructions which alone furnish the basis of wise and worthy conduct both for individuals and for nations. He, therefore, believes that all men should avail themselves of every possible opportunity to acquaint themselves with its teachings and that all Christians should be faithful and even aggressive in their efforts to teach its truths.

Moreover, several years of teaching the Bible to a multitude of students has convinced the writer that what is needed most is a study of the Bible itself rather than things about it. Having this in mind this little volume presents only a small amount of introductory discussion. It offers instead a large number of topics for study and discussion. By following the suggestions for study which they offer the student may gain a working knowledge of the contents of Biblical history.

It is suggested that these outlines will furnish a basis of work for college and academy Bible classes. It is also hoped that it may be adopted for study in many Sunday School classes. If it shall be studied in the Sunday Schools according to instructions which the author will furnish, it will be granted college entrance credit in Baylor University. Women’s societies will find it well suited to their Bible study work.

The aim has been to make a companion book to the author’s “The Bible Book by Book.” The twenty one periods selected are only one of the many ways in which Bible history may be divided and lays no claim to superiority. If this volume shall prove as helpful as the sale of its companion book would indicate that it has been, the work incident to its preparation will be amply repaid.