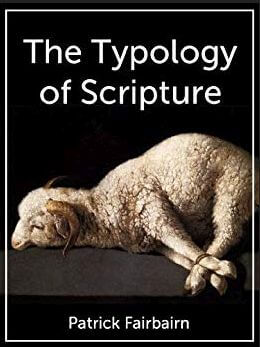 Fairbairn, Patrick – The Typology of Scripture (2 vols) is one of the standards in the field of Typology in Biblical studies. The study is itself is “replete and complete” with historical, intra-Biblical, and interdepartmental evaluations of typology. The language is ornate and intricate in Fairbairn’s writing style but well worth the effort to follow.

About Typology of Biblical Studies
The text is one of the standards in the field of Typology in Biblical studies. The study is itself is “replete and complete” with historical, intra-Biblical, and interdepartmental evaluations of typology. The language is ornate and intricate in Fairbairn’s writing style but well worth the effort to follow.

Fairbairn thoroughly discusses the material. For example, Cherubim are analyzed from Genesis to Revelation. He examines the historical process of their development, meaning, and usage in the contexts of each Bible book. He discusses the Cherubim as symbol and the elevation of that symbolism in thought-provoking detail. Similar enlightenment is found for discussions of other types, meanings, and development over time. He shows that the Old Testament types were fulfilled in the New Testament, yet function as a type pointing onward into the Eschaton, just as does the NT anti-type.

This book is best suited for long-term, intense study, rather than light reading because of the complexity of some material and the wording. The book remains an absolute wealth for Biblical typology.

About Patrick Fairbairn
Patrick Fairbairn (1805-1874) was born in Berwickshire, Scotland, studied at Edinburgh University, and was an outstanding scholar among Scottish Presbyterians. After 27 years in pastoral service, he served three years as divinity professor at the Free Church College in Aberdeen before becoming principal of the Free Church College, Glasgow, for 18 years until his death.

Contents
Book First.—Inquiry Into The Principles Of Typical Interpretation, With A View Chiefly To The…
—–Chapter First.—Historical And Critical Survey Of The Past And Present State Of Theologic…
—–Chapter Second.—The Proper Nature And Province Of Typology.—1. Scriptural Use Of The Wor…
—–Chapter Third.—The Proper Nature And Province Of Typology—2. The Historical Characters A…
—–Chapter Fourth.—The Proper Nature And Province Of Typology—3. God’s Work In Creation, Ho…
—–Chapter Fifth.—Prophetical Types, Or The Combination Of Type With Prophecy—Alleged Doubl…
—–Chapter Sixth.—The Interpretation Of Particular Types—Specific Principles And Directions.
—–Chapter Seventh.—The Place Due To The Subject Of Typology As A Branch Of Theological Stu…
Book Second. The Dispensation Of Primeval And Patriarchal Times.
—–Preliminary Remarks.
—–Chapter First. The Divine Truths Embodied In The Historical Transactions On Which The Fi…
—–Chapter Second.—The Tree Of Life.
—–Chapter Third.—The Cherubim (And The Flaming Sword).
—–Chapter Fourth.—Sacrificial Worship
—–Chapter Fifth.—The Marriage Relation And The Sabbatical Institution.
—–Chapter Sixth.—Typical Things In History During The Progress Of The First Dispensation.
Appendices.
—–Appendix A.—The Old Testament In The New.
—–Appendix B.—The Doctrine Of A Future State..
—–Appendix C.—On Sacrificial Worship.
—–Appendix D.—Does The Original Relation Of The Seed Of Abraham To The Land Of Canaan Affo…
—–Appendix E.—The Relation Of Cannan To The State Of Final Rest (Hebrews 4:1, 10)
Book Third.
—–Chapter First.—The Divine Truths Embodied In The Historical Transactions Connected With …
—–Chapter Second.—The Direct Instruction Given To The Israelites Before The Erection Of Th…
—–Chapter Third.—The Religious Truths And Principles Embodied In The Symbolical Institutio…
—–Chapter Fourth.—Historical Developments.
Appendices
—–Appendix A.—Views Of The Reformers Regarding The Sabbath.
—–Appendix B.—Altar Of Burnt Offering.
—–Appendix C.—Supplementary Remarks On The Subject Of Sacrifice By Blood.
—–Appendix D.—On The Term Azazel.

Fairbairn, Patrick - The Typology of Scripture (2 vols) is one of the standards in the field of Typology in Biblical studies. The study is itself is "replete and complete" with historical, intra-Biblical, and interdepartmental evaluations of typology. The language is ornate and intricate in Fairbairn's writing style but well worth the effort to follow.