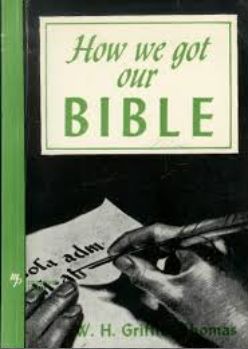 “the authority of the bible”

William Henry Griffith Thomas (2 January 1861 – 2 June 1924) was an Anglican cleric and scholar from the English-Welsh border country. He has been quoted by theologian Alister McGrath in the science-versus-religion debate.[1]

In addition to several pastorates, he taught for several years as Principal of Wycliffe Hall, Oxford (1905–1910)[2] and then at Wycliffe College in Toronto, Ontario, Canada (1910–1919).[3] He was a co-founder with Lewis Sperry Chafer of Dallas Theological Seminary. He authored several books including The Principles of Theology, a systematic theology text based on the 39 Articles of the Anglican Communion. Theologically conservative, Griffith Thomas was an Anglican and an early dispensationalist. Whilst at Oxford he edited the theological magazine, the Churchman.[4]

Gaining the reputation of a popular author and speaker in dispensationalism and victorious Christian life, he spent the last five years of his life writing and speaking at conservative gatherings. Partially funded by the Milton Stewart Evangelistic Fund, Thomas traveled with Charles G. Trumbull to Japan and China in the summer of 1920. In 1920 after returning to the United States from China, he made a sweeping accusation of the modernist tendency among China missionaries in the famous speech, "Modernism in China." The speech was delivered to the Presbyterian Social Union in Philadelphia in January 1921 and caused a great deal of debate among the churches and mission boards in North America. Thomas was accused of being directly responsible for the founding of the Bible Union of China. His reply was that "I had nothing to do with the formation of the Bible Union, except in so far as my address seems to have been the immediate occasion for it." There is certainly no evidence that Thomas personally initiated the Bible Union in China, but his speeches in China during summer missionaries retreat had the effect of significantly intensifying the conservatives' negative sentiment toward modernism in the field and prompting them to take public action.

More recently, Griffith Thomas has been quoted in the current science-versus-religion debate by the theologian Alister McGrath in his argument with the scientist Richard Dawkins over the issue of whether or not religious faith is based on evidence. According to McGrath,[1] Griffith Thomas expressed a typical and characteristic Christian understanding of faith when he wrote:

Griffith Thomas' view of "evidence" and "proof" in relation to the Bible, can be found in How We Got Our Bible and Why We Believe It Is God's Word.[7]

Table of Contents of Authority of the Bible

More Works on the Authority of Scripture

Minor Mentions of the Authority of Scripture

Appearing as a posthumous work of that dean of Bible teachers, Dr. W. H. Griffith Thomas (1861-1924), this volume should have a special appeal to all who knew and loved the author, or who are familiar with his earlier works. The Rev. W. Graham Scroggie has said that “the reading of Dr. Thomas’ books creates in one a deeper love of and desire for God as revealed in his Word,” and this is strikingly true of this clear and satisfying marshaling of evidence as to what the Bible is. These studies have appeared serially in the Friends’ Witness under the title, “The Book of Books.”