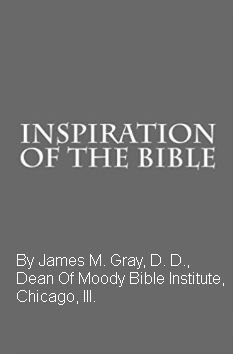 Inspiration of the Bible is a short 4 chapter work by Dr. Gray (President of Moody Bible Institute). His works are very scholarly. He examines the definition of Inspiration, the Extent, the Proof, and then difficulties and objections to Inspiration.

Inspiration of the Bible

In this paper the authenticity and credibility of the Bible are assumed, by which is meant
(1), that its books were written by the authors to whom they are ascribed, and that their contents are in all material points as when they came from their hands; and
(2), that those contents are worthy of entire acceptance as to their statements of fact. Were there need to prove these assumptions, the evidence is abundant, and abler pens have dealt with it. Let it not be supposed, however, that because these things are assumed their relative importance is undervalued. On the contrary, they underlie inspiration, and, as President Patton says, come in on the ground floor. They have to do with the historicity of the Bible, which for us just now is the basis of its authority. Nothing can be settled until this is settled, but admitting its settlement which, all things considered, we now may be permitted to do, what can be of deeper interest than the question as to how far that authority extends? This is the inspiration question, and while so many have taken in hand to discuss the others, may not one be at liberty to discuss this? It is an old question, so old, indeed, as again in the usual recurrence of thought to have become new. Our fathers discussed it, it was the great question once upon a time, it was sifted to the bottom, and a great storehouse of fact, and argument, and illustration has been left for us to draw upon in a day of need.

For a long while the enemy’s attack has directed our energies to another part of the field, but victory there will drive us back here again. The other questions are outside of the Bible itself, this is inside. They lead men away from the contents of the book to consider how they came, this brings us back to consider what they are. Happy the day when the inquiry returns here, and happy the generation which has not forgotten how to meet it.

Contents of the Inspiration of the Bible

This is a short 4 chapter work by Dr. Gray. His works are very scholarly. He examines the definition of Inspiration, the Extent, the Proof, and then difficulties and objections to Inspiration.