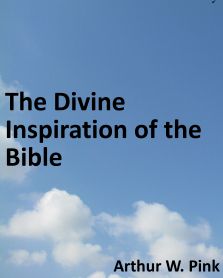 This is a 14 chapter work on the Divine inspiration of Scripture looking at the character and quality of God’s Word, Verbal inspiration.

Pink-Divine Inspiration of the Bible

This is a 14 chapter work on the Divine inspiration of Scripture looking at the character and quality of God’s Word, Verbal inspiration.

Table of Contents of The Divine Inspiration of the Bible

This is a 14 chapter work on the Divine inspiration of Scripture looking at the character and quality of God's Word, Verbal inspiration.