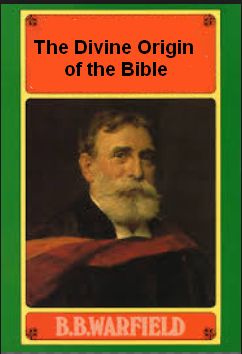 In this 5 chapter work on Bibliology, Warfield (Presbyterian) presents us with the History of the Bible, the structure, the teaching, special characteristics of the Bible, and the impossibility of accounting for the Bible.

The Divine Origin of the Bible

In this 5 chapter work on Bibliology, Warfield (Presbyterian) presents us with the History of the Bible, the structure, the teaching, special characteristics of the Bible, and the impossibility of accounting for the Bible.

Although Warfield is writing about the divine origin of the Bible, actually he is moving through a series of thoughts where he identifies various observations about the Bible, and how they attribute God as its ultimate author. Yes, there were human men of God involved in the transmission of the message from God to mankind, but ultimately God is behind it. Moreover, through inspiration, we see that God not just used these men in the creation of the Bible, but God also guaranteed the fidelity of the message of the Bible even though it went through human “hands”.

The point is not that one single thing gives testimony that God wrote the Bible, although Warfield lists quite a few. The idea is that through all of these points, it becomes overwellingly obvious that God wrote the Bible. As is with so many other problems in arguing with unbelievers, the issue isn’t the quality of the message, it is the rebellion in the heart of man to obey what is obviously from God.

Contents Divine Origin of the Bible

Warfield - The Divine Origin of the Bible
warfield-divine-origin-of-the-bible.gbk_.twm_.twzip