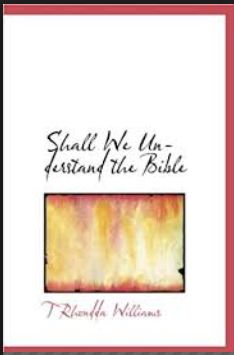 In this work, Shall we understand the Bible?, Williams deals with several issues connected with understanding the Bible: the Historical Interpretation of the Bible, the different concepts of God, of Providence, of a future life, and the idea of the Devil.

Shall we understand Bible?

Shall we understand the Bible?
by Thomas Williams 1906

In this work, Williams deals with several issues connected with understanding the Bible: the Historical Interpretation of the Bible, the different concepts of God, of Providence, of a future life, and the idea of the Devil.

Who this Thomas Williams is is really a thing to pin down. There are just so many Thomas Williams out there, and even in just the religious world, there are too many to trace this down.

From my time in studying the Bible and reading literature, I would guess that Thomas Williams was probably a Roman Catholic (not much of a guess there for Catholics don’t care to understand Scripture in general) or Anglican. I would think that he was more Anglican than not. He speaks of Mass and Abbeys so he is probably decrying the cold deadness of his religion. Anglicans are basically left-over Catholics. But I say that because they have drug much of Catholicism into their religion, and this is where they originally came from. But at the same time, Anglicans are an interesting group, because they decry the cold deadness of Catholicism, and they make a lot of good points about the errors of Catholicism, while doing so though, they ignore or refuse to identify this very same religious form as the cause of that deadness.

Contents of Williams Shall we understand the Bible?

Williams- Shall we understand the Bible? (bibliology) Gbk
williams-understand-biblebibliology.gbk_.twm