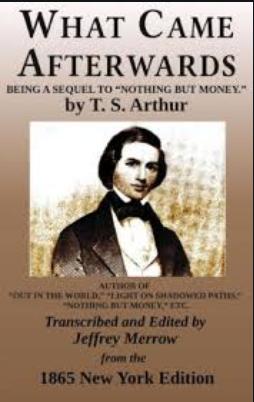 Sequel to ‘Nothing but Money’

Sequel to ‘Nothing but Money’

IT was an evening in winter. A man, just above the medium height, with a ‘pale, delicately cut, intellectual face, sat by an ofﬁce table, above which depended ‘ a shaded gas-light. He was leaning over a book, now examining a page intently, and now turning the leaves with rapid ﬁngers — not so much reading, as searching for some fact, formula, or illustration. His face, we said, was pale; but the paleness was not of ill health, nor in consequence of prolonged physical exhaustion; for the skin had a clear, healthy look, and the strong brown eyes, that glanced up, now and then, in pauses of reﬂection, were full of ﬁre. The face, as we said, was delicately cut; the forehead high and broad; the eyebrows thin, but darkly deﬁned; the lashes well fringed and with a graceful curve upwards , the nose long, rather prominent, but straight, with wide, almost transparent nostrils ; full lips, and slightly receding chin.

There was not a hard or harsh line in his face. The artist-soul, which had been at work upon it for many vcars— the snow-ﬁecked hair said many years — drew, it was plain, her inspiration and ideals of beauty, from heavenly spheres. Truth, purity, self-discipline, high thoughts and noble purposes, with love of the neigh bor, had all guided the artist-soul, as it wrought upon the material investure, and cut it into a represent ation of its own interior life. So the soul is ever at work upon the face, giving to it the Form of its quality. If you have skilled eyes, you may read the men you meet by the lines of their countenances.

He sat at an ofﬁce table, the strong gas-light ﬂooding his face, and giving it an almost supernatural beau ty. There were many cases standing against the walls of the ofﬁce, which was spacious, and carpeted ; -— cases of books ; of’ chemical and philosophical apparatus ; of’ drugs and curious specimens in bottles; and of an atomical preparations. Orderly arrangement, and an air of taste and comfort, were in everything. The man and his surroundings were in harmony.

The door opened so quietly, that he was not aware of the presence of any one, until a child’s voice asked the question. Glancing up, he saw a little girl, not over eight years of age, standing just inside of the of…