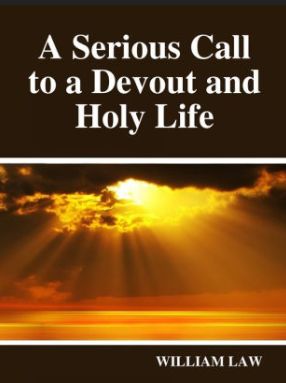 Law-Serious Call to a Devout and Holy Life is a long 27 chapter work on how to be holy. Excellent work! Classic. Must read book.

Law-Serious Call to a Devout and Holy Life is a long 27 chapter work on how to be holy. Excellent work! Classic. Must read the book.

Law, William – A Serious Call to a Devout and Holy Life

PDF version: Law – A Serious Call to a Devout and Holy Life

“…Devotion signifies a life given, or devoted, to God.” So begins William Law’s Serious Call to a Devout and Holy Life. Originally published in 1729, Law’s book stands as a powerful challenge to Christians. Law teaches that if God is “our greatest good,” then the wisest way to live is to please God through a life of worship, adoration, and devotion. Since many fail to live this way, Law diagnoses why and suggests certain concrete practices as a remedy. Thus, no one interested in becoming more devout can ignore this dynamic book. Law’s call has encouraged several generations and does not fail to encourage believers even today with a serious call to a devout and holy life.      CCEL

Serious Call to a Devout and Holy Life
by William Law

Chapter 1.   Concerning the nature and extend of Christian devotion
Chapter 2.   An inquiry into the reason, why the generality of Christians fall so far short of the holiness and devotion of Christianity
Chapter 3.   Of the great danger and folly, of not intending to be as eminent and exemplary as we can, in the practice of all Christian virtues
Chapter 4.   We can please God in no state or employment of life, but by intending and devoting it all to His honour and glory
Chapter 5.    Persons that are free from the necessity of labour and employments, are to consider themselves as devoted to God in a higher degree
Chapter 6.    Containing the great obligations, and the great advantages of making a wise and religious use of our estates and fortunes
Chapter 7.    How the imprudent use of an estate corrupts all the tempers of the mind, and fills the heart with poor and ridiculous passions, through the whole course of life; represented in the character of Flavia
Chapter 8.    How the wise and pious use of an estate naturally carrieth us to great perfection in all the virtues of the Christian life; represented in the character of Miranda
Chapter 9.    Containing some reflections upon the life of Miranda, and showing how it may, and ought to be imitated by all her sex
Chapter 10.    Showing how all orders and ranks of men and women, of all ages, are obliged to devote themselves unto God
Chapter 11.    Showing how great devotion fills our lives with the greatest peace and happiness that can be enjoyed in this world
Chapter 12.    The happiness of a life wholly devoted to God farther proved, from the vanity, the sensuality, and the ridiculous poor enjoyments, which they are forced to take up with who live according to their own humours. This represented in various characters
Chapter 13.    That not only a life of vanity, or sensuality, but even the most regular kind of life, that is not governed by great devotion, sufficiently shows its miseries, its wants and emptiness, to the eyes of all the world. This represented in various characters
Chapter 14.    Concerning that part of devotion which relates to times and hours of prayer. Of daily early prayer in the morning. How we are to improve our forms of prayer, and how to increase the spirit of devotion
Chapter 15.    Of chanting, or singing of psalms in our private devotions. Of the excellency and benefit of this kind of devotion. Of the great effects it hath upon our hearts. Of the means of performing it in the best manner
Chapter 16.    Recommending devotions at nine o’clock in the morning, called in Scripture the third hour of the day. The subject of these prayers is humility
Chapter 17.    Showing how difficult the practice of humility is made, by the general spirit and temper of the world. How Christianity requireth us to live contrary to the world
Chapter 18.    Showing how the education which men generally receive in their youth makes the doctrines of humility difficult to be practised. The spirit of a better education represented in the character of Paternus
Chapter 19.    Showing how the method of educating daughters makes it difficult for them to enter into the spirit of Christian humility. How miserably they are injured and abused by such an education. The spirit of a better education, represented in the character of Eusebia
Chapter 20.    Recommending devotion at twelve o’clock, called in Scripture the sixth hour of the day. This frequency of devotion equally desirable by all orders of people. Universal love is here recommended to be the subject of prayer at this hour. Of intercession, as an act of universal love
Chapter 21.    Of the necessity and benefit of intercession, considered as an exercise of universal love. How all orders of men are to pray and intercede with God for one another. How naturally such intercession amends and reforms the hearts of those that use it.
Chapter 22.    Recommending devotion at three o’clock, called in Scripture the ninth hour of the day. The subject of prayer at this hour is resignation to the Divine pleasure. The nature and duty of conformity to the will of God, in all our actions and designs
Chapter 23.    Of evening prayer. Of the nature and necessity of examination. How we are to be particular in the confession of all our sins. How we are to fill our minds with a just horror and dread of all sin
Chapter 24.    The conclusion. Of the excellency and greatness of a devout spirit
Appendix A.    From the Introduction to the Methuen edition, by C. Bigg, DD
Appendix B.    From the Introduction to the Dent Everyman edition
Appendix C.    The electronic edition
Formatted by David Cox
[email protected]
www.paypal.me/davidcoxmex

This article is about the British theological writer. For other people, William Law Born 1686 Kings Cliffe, Northamptonshire Died 9 April 1761 Kings Cliffe, Northamptonshire Venerated in Anglican Communion Feast 10 April William Law (1686 – 9 April 1761) was a Church of England priest who lost his position at Emmanuel College, Cambridge when his conscience would not allow him to take the required oath of allegiance to the first Hanoverian monarch, King George I. Previously William Law had given his allegiance to the House of Stuart and is sometimes considered a second-generation non-juror (an earlier generation of non-jurors included Thomas Ken). Thereafter, Law first continued as a simple priest (curate) and when that too became impossible without the required oath, Law taught privately, as well as wrote extensively. His personal integrity, as well as his mystic and theological writing greatly influenced the evangelical movement of his day as well as Enlightenment thinkers such as the writer Dr Samuel Johnson and the historian Edward Gibbon. In 1784 William Wilberforce (1759–1833), the politician, philanthropist and leader of the movement to stop the slave trade, was deeply touched by reading William Law's book A Serious Call to a Devout and Holy Life (1729).[1] Law's spiritual writings remain in print today.

Law-Serious Call to a Devout and Holy Life is a long 27 chapter work on how to be holy. Excellent work! Classic. Must read book.