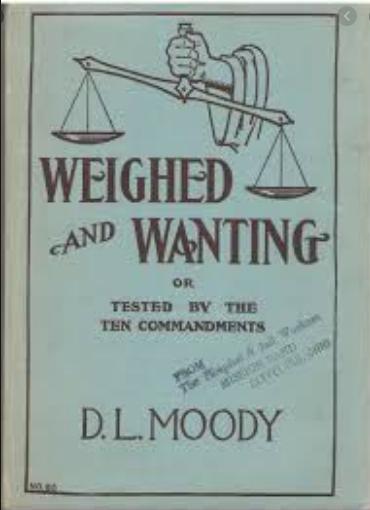 Moody Weighed and Wanting is a work on the ten commandments, comparing our lives to that standard, and how we do not meet up to it.

Moody Weighed and Wanting is a work on the ten commandments, comparing our lives to that standard, and how we do not meet up to it.

Weighed and Wanting: Addresses on the Ten Commandments
BY D. L. MOODY
“Tekel: Thou art weighed in the balances, and art found wanting.”

Contents of Weighed and Wanting

From Wikipedia, the free encyclopedia
Preacher, evangelist and publisher

Dwight Lyman Moody (February 5, 1837 – December 22, 1899), also known as D. L. Moody, was an American evangelist and publisher connected with the Holiness Movement, who founded the Moody Church, Northfield School and Mount Hermon School in Massachusetts (now Northfield Mount Hermon School), Moody Bible Institute and Moody Publishers. One of his most famous quotes was “Faith makes all things possible... Love makes all things easy.“ Moody gave up his lucrative boot and shoe business to devote his life to revivalism, working first in the Civil War with union troops through YMCA in the United States Christian commission. In Chicago, he built one of the major evangelical centers in the nation, which is still active. Working with singer Ira Sankey, he toured the country and the British Isles, drawing large crowds with a dynamic speaking style that preached God's love and friendship, kindness and forgiveness rather than hellfire and condemnation.

Chicago and the postwar years

In June 1871 at an International Sunday School Convention in Indianapolis, Indiana, Dwight Moody met Ira D. Sankey. He was a gospel singer, with whom Moody soon began to cooperate and collaborate.[7] Four months later, in October 1871, the Great Chicago Fire destroyed Moody's church building, as well as his house and those of most of his congregation. Many had to flee the flames, saving only their lives, and ending up completely destitute. Moody, reporting on the disaster, said about his own situation that: "... he saved nothing but his reputation and his Bible."[8]

In the years after the fire, Moody's wealthy Chicago patron John V. Farwell tried to persuade him to make his permanent home in the city, offering to build a new house for Moody and his family. But the newly famous Moody, also sought by supporters in New York, Philadelphia, and elsewhere, chose a tranquil farm he had purchased near his birthplace in Northfield, Massachusetts. He felt he could better recover in a rural setting from his lengthy preaching trips.[1]

Northfield became an important location in evangelical Christian history in the late 19th century as Moody organized summer conferences. These were led and attended by prominent Christian preachers and evangelists from around the world. Western Massachusetts has had a rich evangelical tradition including Jonathan Edwards preaching in colonial Northampton and C.I. Scofield preaching in Northfield. A protégé of Moody founded Moores Corner Church, in Leverett, Massachusetts, and it continues to be evangelical.

During a trip to the United Kingdom in the spring of 1872, Moody became well known as an evangelist. Literary works published by the Moody Bible Institute claim that he was the greatest evangelist of the 19th century.[10] He preached almost a hundred times and came into communion with the Plymouth Brethren. On several occasions, he filled stadia of a capacity of 2,000 to 4,000. According to his memoir, in the Botanic Gardens Palace, he attracted an audience estimated at between 15,000 and 30,000.[11]

That turnout continued throughout 1874 and 1875, with crowds of thousands at all of his meetings. During his visit to Scotland, Moody was helped and encouraged by Andrew A. Bonar. The famous London Baptist preacher, Charles Spurgeon, invited him to speak, and he promoted the American as well. When Moody returned to the US, he was said to frequently attract crowds of 12,000 to 20,000 were as common as they had been in England.[12] President Grant and some of his cabinet officials attended a Moody meeting on January 19, 1876. He held evangelistic meetings from Boston to New York, throughout New England, and as far west as San Francisco, also visiting other West Coast towns from Vancouver, British Columbia, Canada to San Diego.[13]

Moody aided the work of cross-cultural evangelism by promoting "The Wordless Book," a teaching tool developed in 1866 by Charles Spurgeon. In 1875, Moody added a fourth color to the design of the three-color evangelistic device: gold — to "represent heaven." This "book" has been and is still used to teach uncounted thousands of illiterate people, young and old, around the globe about the gospel message.[14]

Moody visited Britain with Ira D. Sankey, with Moody preaching and Sankey singing at meetings. Together they published books of Christian hymns. In 1883 they visited Edinburgh and raised £10,000 for the building of a new home for the Carrubbers Close Mission. Moody later preached at the laying of the foundation stone for what is now called the Carrubbers Christian Centre, one of the few buildings on the Royal Mile which continues to be used for its original purpose.[12]

Moody greatly influenced the cause of cross-cultural Christian missions after he met Hudson Taylor, a pioneer missionary to China. He actively supported the China Inland Mission and encouraged many of his congregation to volunteer for service overseas.[15]

His influence was felt among Swedes. Being of English heritage, never visiting Sweden or any other Scandinavian country, and never speaking a word of Swedish, nonetheless he became a hero revivalist among Swedish Mission Friends in Sweden and America.[16]

News of Moody's large revival campaigns in Great Britain from 1873 through 1875 traveled quickly to Sweden, making "Mr. Moody" a household name in homes of many Mission Friends. Moody's sermons published in Sweden were distributed in books, newspapers, and colporteur tracts, and they led to the spread of Sweden's "Moody fever" from 1875 through 1880.[17]

He preached his last sermon on November 16, 1899, in Kansas City, Missouri. Becoming ill, he returned home by train to Northfield. During the preceding several months, friends had observed he had added some 30 pounds (14 kg) to his already ample frame. Although his illness was never diagnosed, it has been speculated that he suffered from congestive heart failure. He died on December 22, 1899, surrounded by his family. Already installed as the leader of his Chicago Bible Institute. R. A. Torrey succeeded Moody as its pastor.

Spideroak.com is another cloud storage product of 2 GBs free.