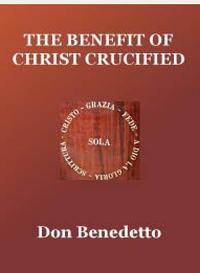 Benedetto Benefit of Christ Crucified is a reformed work on the value of Christ’s suffering and death on the Cross.

Benedetto Benefit of Christ Crucified is a reformed work on the value of Christ’s suffering and death on the Cross.

The following treatise was arguably the most popular book of the short lived Italian Reformation. It is estimated that 40,000 – 80,000 copies were printed between 1541-1548, of which very few remain today due to the fact that most were burned once the title was placed on the list of prohibited books during the Inquisition. The treatise was originally published anonymously under the title Trattato Ultilissimo Del Beneficio Di Geisu Christo Crocifisso, and was for a few hundred years mistakenly attributed to Aonio Paleario (1503-1570), a martyr for the Reformation cause in Italy. But most scholars now agree, based on records from the Inquisition itself, that the “Trattato” was written by Don Benedetto, a student of the Spanish Reformer Juan de Valdes (1498?-1541) and friend of Peter Martyr Vermigli (1499-1562). This online edition makes use of a translation from the original Italian into English by Edward Courtenay (1548), later edited and modernized in 1855 by Rev. R. W. Johnson (Cambridge: Deighton, Bell, & Co., 1855).

CHAPTER I. Of original sin, and of the misery of man.

CHAPTER II. That the law was given of God to the intent that we might first know our sin; and then that distrusting to be justified by our own works, we might run unto the mercy of God, and the righteousness of faith.

CHAPTER III. That the forgiveness of our sins, our justification, and all our salvation dependeth on Christ.

CHAPTER IV. Of the effects of the lively faith, and of the unity or agreement of the soul with Christ.

CHAPTER V. How the Christian man apparelleth or clotheth himself with Christ.

More Works on the Cross/Crucifixion of Calvary for Christ

And forsomuch as we know that under heaven there is given none other name to mankind whereby we may be saved besides the name of Jesus Christ, let us therefore run with the paces or steps of our lively faith in Him, into his arms that calls us, crying, Come to Me, all ye that labor and are laden, and I will ease you.  What consolation, what joyfulness of heart in this life, may be compared to [his] joy and comfort that having felt himself first oppressed with the intolerable weight of his sins, hears afterward so sweet and pleasant a saying of the Son of God, who promised him so mercifully thoroughly to ease and to deliver him of so great a burden?

But all consists in this, that we know from whence our sickness and misery comes: for no man tastes or truly discerns that that is good, unless first he have felt that that is evil; and therefore says Christ, If any man thirst let him come to Me and drink; as He might say, except a man know himself a sinner, and thirst for righteousness, he cannot taste how sweet this our Jesus Christ is, nor how pleasant it is to think and speak of Him, and to follow his most holy life and conversation.

Benedetto Benefit of Christ Crucified is a reformed work on the value of Christ's suffering and death on the Cross.