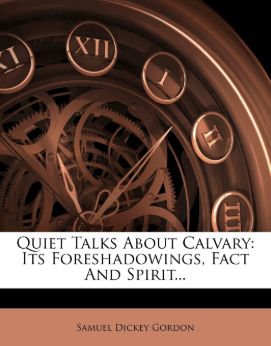 Samuel Dickey Gordon (August 12, 1859 – June 1936) was a prolific author and evangelical lay minister active in the latter part of the 19th and early 20th centuries. Born in Philadelphia, he served as assistant secretary of the Philadelphia Young Men’s Christian Association (YMCA) in 1884-86 and then became state secretary for the YMCA in Ohio, serving from 1886 to 1895.

Table of Contents of Quiet Talks about Calvary

Title Page
Module Prepared byWordModules.com
Chapter 1: The Calvary Foreshadowings
The Principle of Calvary
An Inner Picture
Adrip With Blood
Living the Message
Look for the Man
Chapter 2: The Calvary Fact
Our Lord’s Purpose in Dying
A Living Sacrifice
The Indignities Upon His Person
The Cross
The Climax—Resurrection
Chapter 3: The Calvary Spirit
Follow Me
The Soil of Mens Need
The Greek Door
Living Martyrs
Walking to Georgia

S. D. Gordon (1859-1936) was a popular writer and speaker in the late nineteenth and early twentieth centuries. Born in Philadelphia, at the age of twenty-five Gordon became affiliated with the Young Men’s Christian Association (YMCA), with which he served at various secretarial levels for more than ten years. During this period he developed some public speaking skill and became a popular lecturer on devotional biblical themes.

Between 1896 and 1900 he traveled to Europe and the Orient as a missionary. Gordon authored some twenty-five books, the majority of which were devotional books under the general theme, Quiet Talks, e.g. Quiet Talks on Prayer, Quiet Talks on Service, etc. The Quiet Talks series has been collected and reprinted many times, having sold in the neighborhood of some two million copies.

In 1906 Gordon produced a volume called Quiet Talks About Jesus, which, among other things, set forth his view of dispensational premillennialism. Dispensationalism is the idea that the entire history of human creation can be divided into seven distinct periods which correspond to the seven days of the earth’s first week. The seventh day of the initial week supposedly foreshadows the “millennial” reign of Christ upon the earth, commencing at the time of his return. The term “premillennial” hints that Jesus’ final coming will “precede” that one-thousand-year earthly reign.

One of the leading “champions” of premillennial dispensationalism was C. I. Scofield (1843-1921), whose major defense of the dogma was set forth in the popular Scofield Reference Bible published by Oxford University Press in 1909. Scofield defined a dispensation as “a period of time during which man is tested in respect of obedience to some specific revelation of the will of God.” He postulated that seven dispensations “are distinguished in Scripture.” These supposedly are: Innocency (sic), Conscience, Human Government, Promise, Law, Grace, and Kingdom (1909, 5).

One of the unusual things about Gordon’s work was that he carried some of the premises of Dispensationalism to their utmost logical conclusions, which many dispensationalists have been resistant to do in view of the radical nature of these ideas.

was a prolific author and evangelical lay minister active in the latter part of the 19th and early 20th centuries.

Born in Philadelphia, he served as assistant secretary of the Philadelphia Young Men's Christian Association (YMCA) in 1884-86 and then became state secretary for the YMCA in Ohio, serving from 1886 to 1895.

He is perhaps best known for his series of books "Quiet Talks on ...", which have their own unique style very much different to that of other writers of the day.