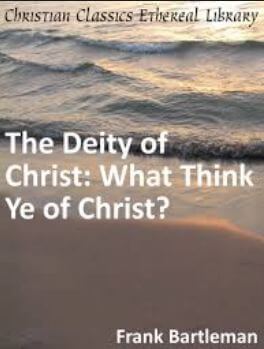 Bartleman’s Deity of Christ is a 6 chapter work on various verses and resources and quotes on the Deity of Christ, and some items on the relationship in the Trinity.

Deity of Christ
What think ye of Christ?

Deity of Christ
By Bartleman

Bartleman’s Deity of Christ is a 6 chapter work on various verses and resources and quotes on the Deity of Christ, and some items on the relationship in the Trinity.

Note that the 6 chapters do not have titles, and they are pretty much just general treatments of the same thing, the Deity of Christ.

This little volume has been prayerfully collected and written to meet the oncoming, terrible onslaught against, and the denial of the absolute Deity of our Lord Jesus Christ, in these last, evil days of apostasy from the true and living faith.

It might be truthfully titled forty volumes in one, for it is the condensed testimony and teaching of a vast number of the very best Christian scholars, dating from the early church fathers down to the present day, on this most important and vital subject of our Christian faith. In fact it contains the very essence of Christian belief concerning the doctrine of the Godhead, both from a theological and a Scriptural standpoint.

It is a book especially to be recommended as of helpful value to scholars, and in fact to all who desire a clearer understanding of this most sacred and profound subject. May the faith of many be built up, strengthened, and restored through its perusal, is the sincere prayer of its author and compiler.
FRANK BARTLEMAN
Los Angeles, California
March, 1926

Bartlenab's Deity of Christ is a 6 chapter work on various verses and resources and quotes on the Deity of Christ, and some items on the relationship in the Trinity.