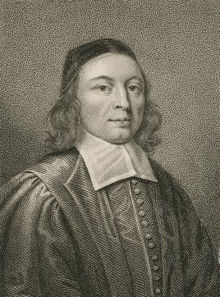 Flavel Of Christ’s Wonderful Person is a single chapter work on the wonderfulness of Jesus Christ and his person and glory.

Flavel Of Christ’s Wonderful Person is a single chapter work on the wonderfulness of Jesus Christ and his person and glory.

We have contemplated the covenant of redemption. It is such as infinitely exceeds the power of any mere creature to perform. He that undertakes to satisfy God by obedience for man’s sin, must himself be God; and he that performs such a perfect obedience, by doing and suffering all that the law required, in our room, must be man. These two natures must be united in one person, else there could not be a cooperation of each nature in his mediatorial work. How these natures are united, in the wonderful person of our Immanuel, is the first part of the great mystery of godliness: a subject, studied and adored by angels! and the mystery thereof is wrapped up in the passage before us.

The Person assuming, the Word, that is, the second Person or Subsistent in the most glorious God-head; called the Word, either because he is the scope or principal matter, both of the prophetical and promissory word; or because he expounds and reveals the mind and will of God to men, as verse 18: “The only begotten Son, which is in the bosom of the Father, he hath declared” or expounded “him.”

The nature assumed, flesh, that is, the entire human nature, consisting of a true human soul and body. For so this word “sarx” in Rom. 3:20, and the Hebrew word Basar, which answers to it, by a usual metonymy of a part for the whole, is used, Gen. 6:12. The word flesh, rather than man, is doubtless used here to enhance the admirable condescension and abasement of Christ implying man’s vileness, weakness, and opposition to spirit. Hence the whole nature is denominated by that part, and called flesh.

The assumption itself, he was made; not “fuit”, he was, (as Socinus would render it, designing thereby to overthrow the existence of Christ’s glorified body now in heaven,) but factus est, he was made, that is, he took or assumed the true human nature into the unity of his Divine person, with all its integral parts and essential properties; and so was made, or became a true and real man, by that assumption.

The apostle speaking of the same act, Heb. 2: 16, uses another word, He “took on him,” or he assumed. And when it is said, he was made flesh, misconceive not, as if there was a mutation of the Godhead into flesh; for this was performed, “not by changing what he was, but by assuming what he was not,” as Augustine well expresses it. As when the Scripture, in a like expression, says, “ He was made sin,” 2 Cor. 5:21, and made a curse, Gal. 3: 13, the meaning is not, that he was turned into sin, or into a curse; no more may we think here the Godhead was turned into flesh, and lost its own being and nature, because it is said he was made flesh.