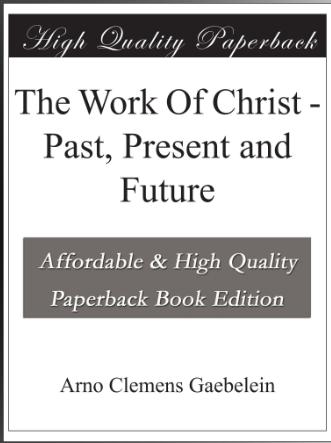 Gaebelein, A.C. – Work of Christ Past, Present and Future. Gaebelein (Brethren) devotes an entire chapter to each one of these three.

Gaebelein, A.C. – Work of Christ Past, Present and Future. Gaebelein (Brethren) devotes an entire chapter to each one of these three.

Gaebelein-Work of Christ Past, Present and Future

Table of Contents of His Riches—Our Riches

We have known no time when the Lord had more need of Mr. Valiant-for-Truth and Mr. Hold-fast-the-Faith than now. Our friend who writes this book is one of the few who have determined to know nothing but Jesus Christ and Him crucified.

This little book touches the heart of the whole Gospel. In its first part it renders an adoring tribute to His essential Deity who is rich with Divine glory; in the second, it follows Him in His humiliation, and portrays that mystery of vicarious suffering for which the Cross is the perpetual signal and symbol; and, in the third, we are led up to those Ephesian heights, from which we survey the ultimate Destiny of His Redeemed Saints.

This book is eminently adapted to save sinners and feed saints. We prayerfully commend it to the loving favor of our God and Father, as it goes forth on its solemn mission, persuaded that it will not return

“For ye know the Grace of our Lord Jesus Christ, that, though He was rich, yet for your sakes He became poor, that ye through His poverty might be rich” (2Co 8:9).

THESE beautiful words, which we find written in connection with Christian giving, contain the blessed Gospel in a most precious fullness. Like the great heart of the Gospel, Joh 3:16- it is so very simple and yet so very deep that its depths have never been fathomed.

Manoah had seen the angel of the Lord, and when he asked his heavenly visitor, What is thy name? He answered, Why askest thou thus after my name, seeing it is “Wonderful”? (Jdg 13:18). And then the angel of the Lord did wondrously before Manoah and his wife and ascended in the flame of the altar. The Holy Spirit through the prophet Isaiah, announcing the birth of the Saviour and the gift of the Son, gives as one of His names “Wonderful.(Isa 9:6)” Even so He is. He is wonderful in His Person and His Work. He is wonderful in all He has done, in what He is doing and in all He will yet do. His words, His acts, His Love, His Grace, His mercy, yea all, is wonderful. Three wonderful facts are found in the above verse. Each fact is more wonderful than the other.

Arno Clemens Gaebelein (August 27, 1861 – December 1945) was a Methodist minister in the United States. He was a prominent teacher and conference speaker. He was also the father of the educator and philosopher of Christian education Frank E. Gaebelein.

Being a dispensationalist, he was a developer of the movement in its early days. Two of his books, Revelation, an Analysis and Exposition and Current Events in the Light of the Bible explain the dispensationalist view of eschatology.

Gaebelein, A.C. - Work of Christ Past, Present and Future. Gaebelein (Brethren) devotes an entire chapter to each one of these three.