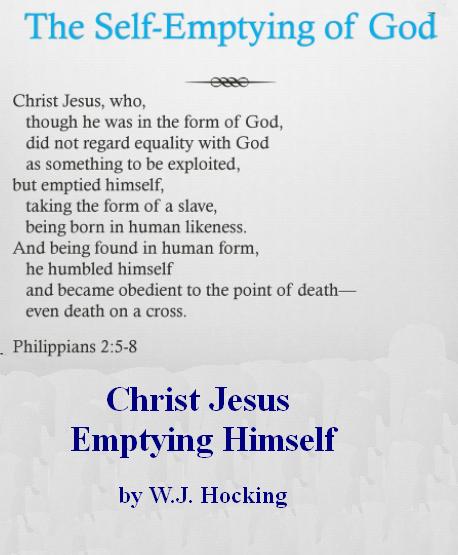 In his Epistle to the Philippians Paul exhorts the saints to avoid all self-exaltation and to cultivate a spirit of humility (Phil. 2:1-4). The apostle does not press humility of disposition as a virtue in an abstract sense, but as a unique excellence perfectly exemplified by Christ Jesus. He writes, “Let this mind be in you which was also in Christ Jesus; Who, being in the form of God … emptied Himself, taking a bondman’s form” (Phil. 2:5-7).

From this revelation by the Spirit of God concerning the incarnation of the Son of God we learn that its outstanding feature lay in His making Himself of no reputation, or emptying Himself, the latter being a preferable rendering of the Greek text.* The apostle teaches that Christ Jesus Who was in “the form of God” voluntarily took upon Himself “the form of a servant (or bond-slave),” whereby He “emptied Himself.” Being “in the likeness of men,” He abstained from using the prerogatives of His deity apart from the will of Him that sent Him. This act of self-abnegation expressed “the mind which was in Christ Jesus,” which “mind” the apostle desired should be in His saints also.

*The comment of a great scholar on Phil. 2:7. is “emptied, stripped Himself of the insignia of majesty”; and again, “He divested Himself, not of His divine nature, for this was impossible, but of the glories, the prerogatives, of Deity. This He did by taking upon Him the form of a servant” (Commentary on Philippians, 12th ed., 1908, by Bp. Lightfoot.).