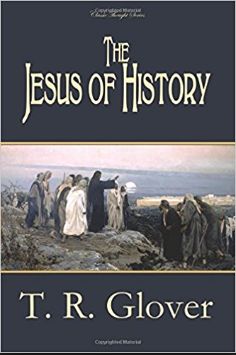 In Glover’s work on the Jesus of History, he explores the life of Christ. Note that he has some really interesting topics such as Jesus’ teaching on Sin, and Christ’s use of the Old Testament. Some others are Jesus’ Own God Consciousness, Jesus is to be known by what he does, and Jesus’ personality.

Jesus of History
By T.R. Grover

In Glover’s work on the Jesus of History, he explores the life of Christ. Note that he has some really interesting topics such as Jesus’ teaching on Sin, and Christ’s use of the Old Testament. Some others are Jesus’ Own God Consciousness, Jesus is to be known by what he does, and Jesus’ personality.

CONTENTS of Jesus of History

CHAPTER II CHILDHOOD AND YOUTH
References in Gospels Utilisation of the parables to reconstruct the domestic life Nature. The city. The talk of the market

CHAPTER III THE MAN AND HIS MIND
Words and looks, as recorded in the gospels Playfulness of speech Movements of feeling Habits of thought: e.g. Quickness. Feeling for fact. Sympathy. Imagination His use of the Old Testament

CHAPTER IV THE TEACHER AND THE DISCIPLES THE BACKGROUND
Hardness of the human life in those times Uncertainness as to God’s plans for the nation—specially as to His purposes for the Messiah Uncertainty as to the immortality of the soul, and its destinies Re-action of all this upon life THE PROBLEM BEFORE THE TEACHER To induce people to try to re-think God To secure the re-thinking of life from its foundations in view of the new knowledge THE TEACHER AND THE DISCIPLES His personality, and his genius for friendship The disciples—the type he prefers Intimacy, the real secret of his method His ways of speech His seriousness The transformation of the disciples

CHAPTER V THE TEACHING OF JESUS UPON GOD JESUS’ OWN GOD-CONSCIOUSNESS
The Nearness of God God’s knowledge and power God’s throne Jesus emphasizes mostly God’s interest in the individual—the love of God THE KNOWLEDGE OF GOD The discovery of God Parables of the treasure finder and the pearl merchant Faith in God Prayer Life on the basis of God.

CHAPTER VI JESUS AND MAN
Jesus’ sympathy with men and their troubles His feelings for the suffering and distressed His feeling for women and children His emphasis on tenderness and forgiveness The characteristics which he values in men The value of the individual soul Jesus and the wasted life Zacchaeus. The woman with the alabaster box. The penitent thief

CHAPTER VII JESUS’ TEACHING UPON SIN
The problem of sin John the Baptist on sin Jesus’ psychology of sin more serious The outstanding types of sin which, according to Jesus, involve for a man the utmost risk: (a) Want of tenderness (b) The impure imagination (c) Indifference to truth (d) Indecision Jesus’ view of sin as deduced from this teaching Implication of a serious view of redemption

CHAPTER IX THE CHRISTIAN CHURCH IN THE ROMAN EMPIRE
THE ROMAN EMPIRE One rule of many races General peace and free intercourse the world over Fusion of cultures, traditions, religions “The marriage of East and West” THE OLD RELIGION (1) Its strength: in its ancient tradition in its splendour of art, architecture and ceremony in its oracles, healings and theophanies in its adaptability in absorbing all cults and creeds (2) Its weakness: No deep sense of truth No association with morality Polytheism The fear of the grave (3) Its defence: Plutarch—the Stoics—Neo-Platonism—the Eclectics THE VICTORY OF THE CHRISTIAN CHURCH (1) Its characteristics (2) Persecuted because it refused to compromise (3) The Christian “out-lived” the pagan “out died” him “out-thought him”

CHAPTER X JESUS IN CHRISTIAN THOUGHT
The impulse to determine who he is, and his relation to God The records of Christian experience The Study of the personality of Jesus Christ (a) The Gospels (b) Christological theory a guide to experience (c) The new experience of the Reformation period Knowledge gained by the experiment comes before explanation JESUS TO BE KNOWN BY WHAT HE DOES The forgiveness of sin, and the theories to explain it Is a Theology of Redemption possible which shall not be mainly metaphor or simile? THE PROBLEM OF THE INCARNATION The approach is to be “a posterioria” In fact, God and man are only known to us in and by Jesus Only in Christ is the love of God as taught in N.T. tenable To know Jesus in what he can do, is antecedent to theory about him

CONTENTS of Jesus of History
1. The Study of the Gospels
2. Childhood and Youth
3. The Man and His Mind
4. The Teacher and the Disciples
5. The Teaching of Jesus upon God Jesus; own God-Consciousness
6. Jesus and Man
7. Jesus' Teaching upon Sin
8. The Choice of the Cross
9. The Christian Church in the Roman Empire
10. Jesus in Christian Thought
Appendix
Suggestions for study circle discussions