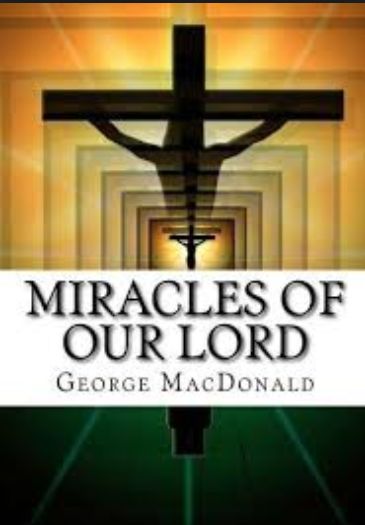 George MacDonald’s work on the miracles of our Lord. Actions, it is often said, speak louder than words. But in the life of Christ – as George MacDonald shows – both spoke with an equal volume. Much attention is often devoted to what Jesus said while He was on earth, but many in our modern age are puzzled by the miracles. What are we to make of them?

George MacDonald’s work on the miracles of our Lord. Actions, it is often said, speak louder than words. But in the life of Christ – as George MacDonald shows – both spoke with an equal volume. Much attention is often devoted to what Jesus said while He was on earth, but many in our modern age are puzzled by the miracles. What are we to make of them?

VII. The casting out of Devils

VIII. The Raising of the Dead

Already Jesus had his disciples, although as yet he had done no mighty works. They followed him for himself and for his mighty words. With his mother they accompanied him to a merry-making at a wedding. With no retiring regard, with no introverted look of self-consciousness or self-withdrawal, but more human than any of the company, he regarded their rejoicings with perfect sympathy, for, whatever suffering might follow, none knew so well as he that—

“there is one
Who makes the joy the last in every song.”

The assertion in the old legendary description of his person and habits, that he was never known to smile, I regard as an utter falsehood, for to me it is incredible—almost as a geometrical absurdity. In that glad company the eyes of a divine artist, following the spiritual lines of the group, would have soon settled on his face as the centre whence radiated all the gladness, where, as I seem to see him, he sat in the background beside his mother. Even the sunny face of the bridegroom would appear less full of light than his. But something is at hand which will change his mood. For no true man had he been if his mood had never changed. His high, holy, obedient will, his tender, pure, strong heart never changed, but his mood, his feeling did change. For the mood must often, and in many cases ought to be the human reflex of changing circumstance. The change comes from his mother. She whispers to him that they have no more wine. The bridegroom’s liberality had reached the limit of his means, for, like his guests, he was, most probably, of a humble calling, a craftsman, say, or a fisherman. It must have been a painful little trial to him if he knew the fact; but I doubt if he heard of the want before it was supplied.

There was nothing in this however to cause the change in our Lord’s mood of which I have spoken. It was no serious catastrophe, at least to him, that the wine should fail. His mother had but told him the fact; only there is more than words in every commonest speech that passes. It was not his mother’s words, but the tone and the look with which they were interwoven that wrought the change. She knew that her son was no common man, and she believed in him, with an unripe, unfeatured faith. This faith, working with her ignorance and her fancy, led her to expect the great things of the world from him. This was a faith which must fail that it might grow. Imperfection must fail that strength may come in its place. It is well for the weak that their faith should fail them, for it may at the moment be resting its wings upon the twig of some brittle fancy, instead of on a branch of the tree of life.