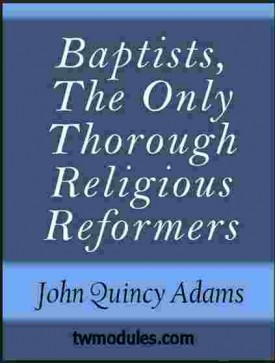 This work of 10 chapters makes the contrast of the Reformers “reformation” and what they left “unreformed”, and how the Baptists have purged those things from their faith and practice.

This work of 10 chapters makes the contrast of the Reformers “reformation” and what they left “unreformed”, and how the Baptists have purged those things from their faith and practice.

Lecture 1. The Aim, the Reproach, and the Triumph of the Religious Reformer
Lecture 2. The Reception Which Should Be Given to the Religious Reformer
Lecture 3. The Weapons of the Religious Reformer
Lecture 4. The First Feature of the Reform at Which Baptists Aim – The Exaltation of the Word of God Above Tradition
Lecture 5. The Second Feature of the Reform at Which Baptists Aim – The Restoration of the Spirituality of Christ’s Kingdom
Lecture 6. The Third Feature of the Reform at Which Baptists Aim – The Propagation of Religious Liberty and the Rights of Conscience
Lecture 7. The Fourth Feature of the Reform at Which Baptists Aim – The Establishment of the Equality of Christ’s Disciples
Lecture 8. The Fifth Feature of the Reform at Which Baptists Aim – The Establishment of the Correct Principle of Biblical Translation
Lecture 9. The Sixth Feature of the Reform at Which Baptists Aim – The Restoration of the Order of the Primitive Churches
Lecture 10. God’s Displeasure at Those Who Remain Sinfully Neutral in a Work of Reform
PREFACE TO THE CENTENNIAL EDITION
The following Lectures have a peculiar history. They were originally delivered to the Baptist Church in Caldwell, N. J., in the ordinary course of pastoral labors in that place, and were not then intended for the press. At the urgent request of those who heard. them, the author was induced to give them to the public. They were delivered. from meager notes, and from these, as his “copy,” the author, himself a practical printer, set up the types of the first edition, which was published in 1858. As much of the matter was thus extemporized, at the “case,” the entire book was never written. The late excellent Spencer H. Cone, D. D., then pastor of the First Baptist Church of New York city, read the proofs, and so well pleased was he with the work, that he ordered the first fifty copies for his own church, recommending it from his pulpit as well as by the notice which appears among the “Recommendations.”
Several editions were printed during the few following years, and the work was widely circulated through the country, and seems to have given a new phase to the baptismal controversy, by directing attention to the GREAT PRINCIPLES which underlie the action of the Baptist denomination. It shows that these principles, though based on God’s Word, are constantly violated by Protestant pedobaptists, though they profess to be governed by that Word. Not a few of these have been led, by the perusal of previous editions, to see the utter inconsistency of pedobaptism with the principles of the New Testament, and have renounced it, and united with the Baptist denomination. Among these, several highly honored and useful brethren, now in the ministry of the denomination, might be named.
The occurrence of our National Centennial seemed to the author an appropriate time to issue a revised. and enlarged edition, especially as some years have elapsed. since the plates of the first editions were destroyed, and during all that time applications have been made for the work, which could not be supplied.
To the advocacy and propagation of the principles here presented, our country owes all it possesses of true greatness. American principles are, essentially, Baptist principles, and this is owing to the fact that Baptist principles have impressed. themselves upon the nation, as the only principles consistent with a government divorced from ecclesiastical control, and recognizing the universal right to civil and religious liberty.
And to the recognition and prevalence of these principles, the evangelical pedobaptist churches of our land owe their spirituality and moral power, in spite of the inconsistency of infant baptism, the legitimate and baneful fruits of which are nipped in the bud. by the influence of Baptist churches.
With the earnest prayer that the present edition may be as useful, at least, as previous ones, in leading Christians of every name to the knowledge and practice of Bible truth, the work is commended to the blessing of God, and the candid consideration of the reader.
J. Q.A. (John Quincy Adams)
Newburgh, NY 1876.
RECOMMENDATIONS
FROM THE FIFTH EDITION, PUBLISHED IN OCTOBER 1856.
From REV. SPENCER H. CONE, D. D.

“We have read this little book with more than ordinary gratification. It treats an important subject in a Scriptural and logical manner. There is no attempt to conceal or modify our denominational principles; they are stated kindly and persuasively, yet with a manliness and earnestness worthy of all praise. We suggest the expediency of stereotyping the work, printing it in a cheap form and circulating it by thousands. ‘Christian baptism is immersion only; if it is right to preach it, it is right to print it:’’ – that is my creed; and without either violating it or covering it up, I can heartily commend this plain, straightforward production of our young ministering brother to all who wish to ‘buy the truth and sell it not.’”
From REV. ARCHIBALD MACLAY, D. D.

“With the work of Brother Adams, entitled “BAPTISTS THOROUGH REFORMERS,” I am decidedly well pleased. I have perused it with great satisfaction, and consider the reasoning contained in it the most conclusive I have ever read. It is just the book for the times, I can cheerfully recommend it.”
From the N. Y. RECORDER.

“Baptists Thorough Religious Reformers:. BY JOHN QUINCY ADAMS.– Mr. Adams illustrates in himself several things; that practical printers make clear, straight-forward writers – that Pedobaptists who sacrifice something for their convictions, make thorough Baptists – and that he is the strongest Baptist of all, who, passing far down beneath philological questions, in which some shallow opponents think they see all there is of Baptist doctrines, sees and comprehends the principles which are embodied in the denomination, as in the primitive church. All these characteristics, illustrated in Mr. Adams personally, are transferred to his book. It is clear and straightforward – it is thoroughly Baptist – and it is so, not on grounds of philology merely, but of those foundation principles which belong to the kingdom of Christ. The volume is suggestive and valuable and will be read with interest and advantage.”
From the MICHIGAN CHRISTISAN HERALD, Detroit.

“The Baptists have not hitherto performed their share of book-work. They are, however, retrieving their character. This work, from the pen of REV. JOHN QUINCY ADAMS, is the result of a course of lectures. It is written in a plain, clear, straightforward style, and is an earnest and honest exposition of the great principles of Baptists. The author was formerly a Pedobaptist, and in changing his church relation, he has been led to look more intelligently into the principles of the Baptists, than many who have not had the same reasons to study them. The book should be in the hands of every Baptist family.”
From the GOSPEL BANNER, St. Louis, Mo.

“The author, JOHN Q. ADAMS, is a man of clear perceptive powers. He looks into a subject, not at one. He digs down beneath the surface, and has something to do with principles, which, like roots interlaced, form the strong support of the Christian tree. His subject has been for years a central thought, around which other thoughts have gathered. It grows naturally; he treats it with a master-hand. It is a book you all need. Buy it.”
From the TENNESSEE BAPTIST, Nashville, Tenn.

“We read this book with much interest and satisfaction. The arrangement of the themes is admirable, the discussion of the various topics is bold, clear, earnest, and satisfactory. It presents Baptist principles in an imposing and interesting light, and in this is well calculated to do good. This book should be circulated by tens of thousands. It should be scattered broadcast over the whole land. We shall be glad to see it introduced into the South and West, and we hope our booksellers will order large supplies. Instead of pursuing a time-serving policy, Mr. ADAMS speaks right out, and proclaims our principles to the world, though surrounded by the most adverse circumstances. We honor him for his fidelity and fearlessness. May such men be multiplied.”
From the N. Y. CHRONICLE.

“This work presents the distinctive features of the Baptist denomination in a, new light, and should be read by every Protestant.”
From the CHRISTIAN (QUARTERLY) REVIEW.

“We are here presented with a small volume containing great and weighty principles, which cannot fail of commending themselves to the judgment of the judicious reader. Had the Reformation been carried forward on. these principles, the opposing obstacles to the union of God’s people, and, consequently, to the prevalence of the Gospel, had been taken out of the way. The volume is valuable and will repay a careful perusal.”
[In addition to the above notices many others of subsequent editions have been received. When the author was in London, in August 1868, Rev. C. H. Spurgeon informed him that he had used “Baptists Thorough Reformers” as a text book in his Pastor’s College, regarding it as the best Manual of Baptist principles he had met. ]

This work of 10 chapters makes the contrast of the Reformers "reformation" and what they left "unreformed", and how the Baptists have purged those things from their faith and practice.