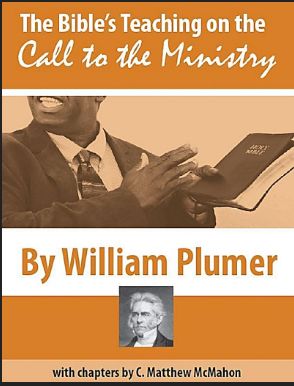 In Plumer’s (Presbyterian) 1 chapter Doctrine of a Scriptural Call to the Gospel Ministry he examnes what makes a call to the ministry form a biblical standpoint.

The Doctrine of a Scriptural Call to the Gospel Ministry

Some years ago, the writer was entrusted, by the Presbytery of which he was then a member, with the special care of that branch of their operations which relates to the education of pious, but indigent young men for the Ministry. In fulfilling this appointment, frequent demands were made for information on the subject of a call to that work. No satisfactory essay on the subject was known. Things being thus, private application was made to several fathers in the Church to write such an essay for publication, but without success. Being thus left, and by office being called to give information, the writer at length reduced his thoughts to something like system; and early in April, 1831, preached the following Sermon before the students of the Union Theological Seminary, (Va.) Soon after, an article appeared in the Biblical Repertory on the same subject. The author has also within a few days learned, that the excellent Thomas Boston published a sermon on this subject, and founded on the portion of Scripture which stands at the head of this Discourse. Although he has never seen Mr. Boston’s discourse, it is believed
22 PREFACE.
that he, like the valuable writer in the Repertory, treats the subject in a manner applicable to those who are in the Ministry, or about to enter it, rather than to those who think of taking measures that may finally lead to that sacred office. Respecting the sameness of texts, the language of another on a similar occasion is appropriate. ” The coincidence was entirely accidental; and the text in each instance being employed very much in the manner of a motto, it is hoped the train of thought will be found sufficiently distinct.” So much for the history of this Sermon. The serious attention of the reader is invited to a few remarks concerning THE SPIRIT WITH WHICH THIS SUBJECT OUGHT TO BE STUDIED.

That any subject, involving moral truth, religious duty, and solemn responsibility, studied in an improper spirit, may be, and most probably will be determined sinfully, is in full accordance with scriptural principle and careful observation. Besides, a wrong spirit is itself highly criminal, even though it govern not final decisions. If, then, we would innocently inquire into this matter, we must approach it seriously solemnly reverentially. Thus we ought to approach all subjects of a kindred character—much more, then, this. He who jests,
PREFACE. 23
he who trifles, he who feels no solemn awe, when considering this matter, may well doubt not only his fitness for the Ministry, but the reality of his piety. When God was about to call Moses, and make him a great prophet, He first appeared to him in the burning bush. And when Moses ” turned aside to see,” God said, ” Draw not nigh hither,” [remain at a reverential distance]: ” put off thy shoes from off thy feet, for the place where on thou standest is holy ground.” ” And Moses hid his face.” So let all do, who think of becoming ” Ambassadors for Christ,” ” Messengers of the LORD of Hosts.” Too muchi solemnity and holy reverence cannot be exercised on this momentous subject.

Another state of the heart, essential to the proper consideration of this matter, is patient waiting on God, producing caution and deliberation. This subject is often introduced in Scripture in reference to our doubts and difficulties and darkness, and is often of unlimited application. If any think otherwise, an examination of those passages of revealed truth, in which the words tcait and haste with their variations occur, will satisfy him. Moreover, common observation abundantly proves, that purposes respecting duty, if hastily formed, are either foolish, or hastily abandoned. A man who acts
24 PREFACE
without due deliberation, is also guilty for so doing, even though his decision be materially right, and carried into effect. Humility, producing candor, and a willingness to estimate “according to truth,” one’s deficiencies and qualifications, is also indispensable. In this inquiry, ” Pope Self,” is one of the important items. He who is entirely ignorant of his faults and deficiencies, his attainments and abilities, cannot judge intelligently or satisfactorily. He who has real piety and much knowledge of himself, must have genuine and deep humility, when he contemplates such an undertaking as that of a Herald of the Cross. Neither will a disposition to deny one’s gifts and graces be any less dangerous than an extravagant self-conceit. Humility ” thinks soberly, as it ought to think,” and “judges true judgment.”

Finally. All that is included in the idea of docility, is necessary to a right investigation and decision. Of course, the inquirer must possess a deep sense of the folly of mere human wisdom; a spirit of hearty prayer to God for the teaching of the Holy Ghost; a strong desire to know the truth, and an entire willingness to act upon the truth when known. Most, if not all, of the foregoing specifications of spirit are beautifully illustrated in the conduct of Samuel, when God was about to
PREFACE. 25
employ him as a publisher of divine truth, (1 Samuel 3. passim); and in the conduct of Saul of Tarsus, when his bloody purposes were rebuked, and himself about to be sent to preach Christ crucified. So soon as Saul was arrested, he, ” trembling and astonished,” [here was reverence,] “said, Lord, what wilt thou have mc to do?” [here were prayer for direction, solemn inquiry, and strong desire to know the truth.] His prayer was heard—his inquiry was answered—his patience and submission were tried. He was told to ” go into the city,” and there learn what he must do. He went, thus manifesting his willingness to obey, and, in obeying, to learn. Soon he did learn, and ” preach Christ in the synagogues, that he is the Son of God.” Acts 9:1-20.

Dear youthful Reader! if you have not the spirit just described, read no further, until you look to God through Christ for the influences of the Holy Ghost, to make you solemn, reverential, humble, candid, deliberate, docile, wise, and holy, in your aims and purposes.

In Plumer's (Presbyterian) 1 chapter Doctrine of a Scriptural Call to the Gospel Ministry he examnes what makes a call to the ministry form a biblical standpoint.