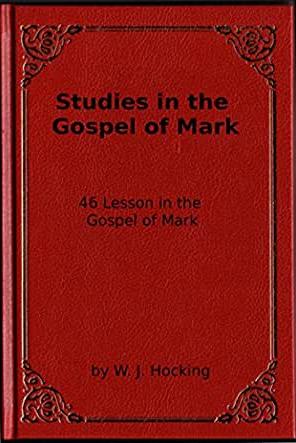 Table of Contents of Studies in the Gospel of Mark

Section 1 The Gospel of Jesus Christ
Section 2 The Quotations from the Old Testament
Section 3 The Baptism of Jesus and the Witness from Heaven
Section 4 The Wild Beasts and the Angels
Section 5 Jehovah’s Servant Preaching
Section 6 The Call of the Four Fishermen
Section 7 A Sabbath at Capernaum
Section 8 Evening and Morning (First Day) at Capernaum
Section 9 The Leper Touched and Cleansed
Section 10 Out of Weakness made Strong
Section 11 Publicans Enter the Kingdom
Section 12 Fasting and Feasting
Section 13 The Servant of Jehovah the Lord of the Sabbath
Section 14 A Merciful Deed on the Sabbath
Section 15 A Summarized Statement of Service
Section 16 The Appointment of the Twelve
Section 17 Opposition by Friends and Foes
Section 18 Obedience the Test of Relationship
Section 19 The Sower, the Seed and the Soils
Section 20 The Hearing Ear and the Mystery of the Kingdom 1Tim 4:4-5
Section 21 The First Parable Interpreted
Section 22 Shining in Public: Growing in Secret
Section 23 The Surprising Growth of a Tiny Seed
Section 24 The Servant’s Word Stilling the Wind and the Sea
Section 25 The Pitiable Plight of Legion
Section 26 Legion Delivered and the Swine Destroyed
Section 27 The Petition of Jairus
Section 28 The Woman’s Touch of Faith
Section 29 The Dead Child Restored
Section 30 Rejection at Nazareth
Section 31 The Twelve Commissioned
Section 32 John’s rebuke of Herod’s sin
Section 33 The Death of the Forerunner
Section 34 The Servant of Jehovah as the Shepherd of Israel
Section 35 Marshalling Into Order
Section 36 The Pathway over the Stormy Sea
Section 36b The Appearance of Jesus
Section 37 The Morning Without Clouds
Section 38 Vain Ablutions
Section 39 The Word of God and the Tradition of Men
Section 40 The True Source of Man’s Defilement
Section 41 Crumbs of Grace for Gentile Dogs
Section 42 The Deaf Stammerer Healed
Section 43 Another Miraculous Meal
Section 44 The Grieved Servant of Jehovah
Section 45 Dim Vision Made Clear
Section 46 Jehovah’s Anointed Servant disowned
contents of Hocking, W.J. – Studies in the Gospel of Mark

Hocking Studies In The Gospel Of Mark
Hocking-W.J.-Studies-in-the-Gospel-of-Mark.gbk_.twm
Version: 1