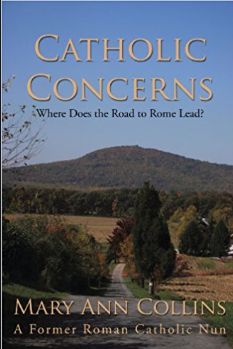 This book is a warning to Evangelicals, a starting point for attempting to leave the Catholic church, and a source of encouragement and support for those who have already left the Catholic church. A former nun, Mary Collins runs a website support group (see book) and counseling to help others from the bondage of the Catholic Church’s false doctrines.

Concerns: Where Does the Road to Rome Lead

A former nun, Mary Collins runs a website support group (see book) and counseling to help others from the bondage of the Catholic Church’s false doctrines.

Official documents from the Second Vatican Council show that Rome wants to bring all Christians back into the Catholic Church. The goal of ecumenism is to reverse the Protestant Reformation.

In today’s ecumenical world, Evangelicals need to understand what Catholicism is and how easily it mixes with non-Christian religions. That’s why Catholic Concerns was written.

Evangelical pastors are promoting Catholic mysticism and contemplative prayer. But where does it lead? At the end of this road, we find Catholic monks who want to be good Buddhists, and Catholic priests who act like gurus, wear orange robes, call Hindu temples a “sacrament” and consider non-Christians to be their brothers and sisters in Christ.

Catholic Concerns reveals what is hiding behind Rome’s modern, ecumenical image. It presents complex subjects in a clear, straightforward manner that is easy to understand. It confronts troubling issues with compassion and objectivity.

Come explore the world of Catholicism, where grace can be “merited” and Mary has a “saving office” (The Catholic Church teaches that Mary’s intercession brings salvation).

Copyright
Copyright 2008 by Mary Ann Collins. All rights reserved. This book may also be purchased on Amazon.com in hardcopy format

About Mary Ann Collins
I was a devout Catholic and a nun. I discovered that some Catholic doctrines are contrary to Scripture, so I left the Catholic Church and became an Evangelical Christian. I wrote a book about Catholicism based on research and my personal experiences.

As I learned more information and my perspective changed, I published revised versions of the book with new titles. “Is Catholicism Biblical” is my best book on the subject, containing important new information. I also have an autobiography, “Searching For Truth.”

Table of Contents of Catholic Concerns