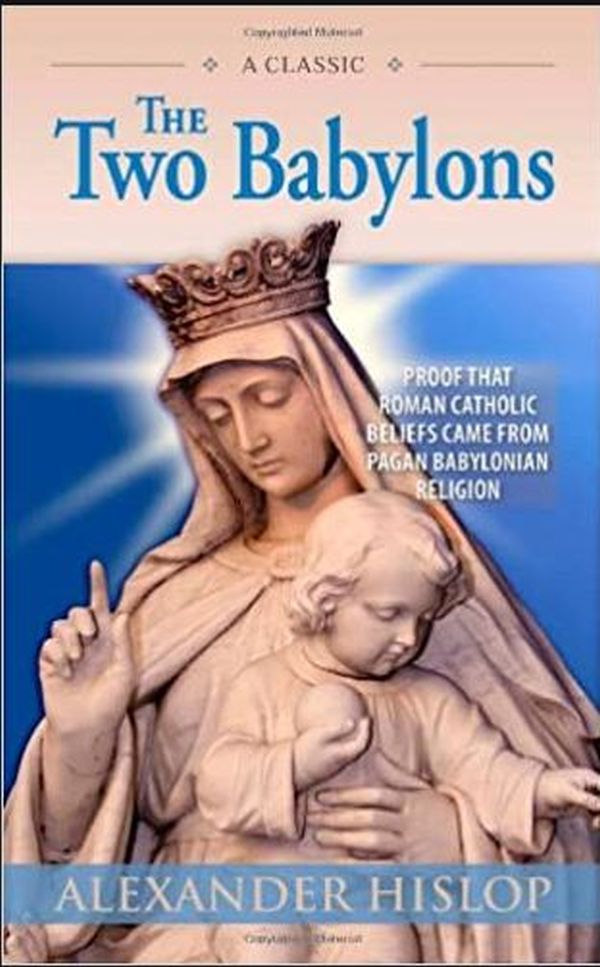 Hislop Two Babylons is an extensive work on Roman Catholicism, showing their doctrines and practices.

Hislop Two Babylons is an extensive work on Roman Catholicism, showing their doctrines and practices.

Alexander Hislop (1807 - 13 March 1865) was a Free Church of Scotland minister known for his criticisms of the Roman Catholic Church. He was the son of Stephen Hislop (died 1837), a mason by occupation and an elder of the Relief Church. Alexander's brother was also named Stephen Hislop (lived 1817–1863) and became well known in his time as a missionary to India and a naturalist.[citation needed]

Alexander was born and raised in Duns, Berwickshire. He was for a time parish schoolmaster of Wick, Caithness. In 1831 he married Jane Pearson. He was for a time editor of the Scottish Guardian newspaper. As a probationer he joined the Free Church of Scotland at the Disruption of 1843. He was ordained in 1844 at the East Free Church, Arbroath, where he became senior minister in 1864. He died of a paralytic stroke in Arbroath the next year after being ill for about two years.[citation needed]

He wrote several books, his most famous being The Two Babylons: Papal Worship Proved to be the Worship of Nimrod and His Wife Read more

This book, initially published in 1853 as a pamphlet, was greatly revised[citation needed] and expanded and released as a book in 1858.

In the book, Hislop argued that the Catholic Church was a Babylonian mystery cult and pagan, but Protestants worshipped the true Jesus and the true God. He believed that Roman Catholic religious practices are pagan practices that were grafted onto true Christianity during the reign of Constantine. Then, the merger between the Roman state religion and its adoration of the mother and child was transferred to Christianity, merging Christian characters with pagan mythology. The goddess was renamed Mary, and Jesus was the renamed Jupiter-Puer, or "Jupiter the Boy".

Hislop believed that the goddess, in Rome called Venus or Fortuna, was the Roman name of the more ancient Babylonian cult of Ishtar, whose origins began with a blonde-haired and blue-eyed woman named Semiramis.[citation needed]

According to Hislop, Semiramis was an exceedingly beautiful woman, who gave birth to a son named Tammuz, was instrumental as the queen, and wife of Nimrod the founder of Babylon, and its religion, complete with a pseudo-Virgin Birth. Later, Nimrod was killed, and Semiramis, pregnant with his child, claimed the child was Nimrod reborn.[citation needed]

Hislop attempted to show that the cult and worship of Semiramis spread globally, her name changing with the culture. In Egypt she was Isis, in Greece and Rome she was called Venus, Diana, Athena, and a host of other names, but was always prayed to and central to the faith which was based on Babylonian mystery religion. According to Hislop, Constantine, though claiming to convert to Christianity, remained pagan but renamed the gods and goddesses with Christian names to merge the two faiths for his political advantage.[citation needed]

Constantine's endorsement of the tradition was a turning point for Early Christianity. In 313, Constantine issued the Edict of Milan legalizing Christian worship. The emperor became a great patron of the Church,[citation needed] and set a precedent for the position of the Christian Emperor within the Church and the notion of orthodoxy, Christendom, and ecumenical councils that would be followed for centuries as the State church of the Roman Empire.

No claim made by Hislop has been confirmed by historians.

(Sources of information include COPAC )

Introduction (in this present topic, see below)

Chapter I Distinctive Character of the Two Systems

Chapter V Rites and Ceremonies
Section I. Idol Procession
Section II. Relic Worship
Section III. The Clothing and Crowning of Images
Section IV. The Rosary and the Worship of the Sacred Heart
Section V. Lamps and Wax-Candles
Section VI. The Sign of the Cross

Catholicism is supposedly founded in the Bible, in New Testament Christianity, but examining closer, it is a totally false religion.

Areas of Study in Catholicism