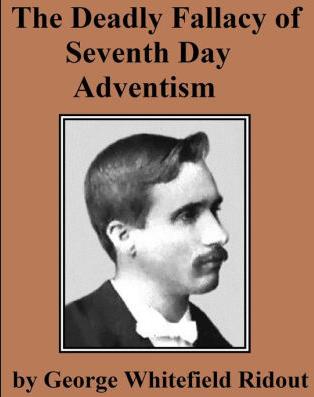 Description: This short 4 chapter work, Deadly Fallacy of Seventh Day Adventism, hits on a couple of key problems with the movement.

In this brief 4 chapter work by Ridout in which he presents us with the problems of the Seventh Day Adventists. He looks at it generally in chapter 1, and then the prophets and prophetess, the absurd claims, and a concluding chapter.

George Whitefield Ridout was born in St. John's Newfoundland. He went to Boston, Massachusetts, as a young man and was educated at Temple University. He served as Professor of Theology at Upland, Indiana. He served as Chaplain with the 38th Regiment in France during World War I. Following the war he accepted the Chair of Theology as Asbury College where he remained until 1927.

Following his teaching service at Asbury, Dr. Ridout, entered missionary and evangelistic work and traveled extensively in Japan, China, India, Africa, and South America. He was widely known in the holiness camp meetings and churches of the United States. For more than thirty years he wrote a weekly page for the Herald (Pentecostal Herald), published at Louisville, Kentucky. His writings also appeared in other holiness papers including the Advocate. He wrote several books, among them "The Cross and the Flag," "Amazing Grace," and "The Power of the Holy Spirit." He was a member of the British Philosophic Society and a fellow of the Royal Geographic Society.

In this brief 4 chapter work by Ridout in which he presents us with the problems of the Seventh Day Adventists. He looks at it generally in chapter 1, and then the prophets and prophetess, the absurd claims, and a concluding chapter.

1. They claim that all who keep the first day of the week, Sunday, bear the mark of the beast,” that is, they bow to the Pope of Rome. This is a foolish unhistorical claim that it was the Pope of Rome who changed the Sabbath. Canright shows that the Catholic doctrine of the change of the Sabbath is this: The Apostles by instruction of Jesus Christ changed the Sabbath from Saturday to Sunday to commemorate the Resurrection of Christ and the descent of the Holy Ghost, both of which occurred on Sunday. The change was made by the Apostles themselves. Catholics never teach that the change of the day was “made by the church two or three hundred years after Christ. ” Archbishop Ireland in 1914 said: “The Apostles and early Christians instituted the Sunday as a day of special prayer in honor of the resurrection and the coming of the Holy Spirit. ” The Roman Catholics do not claim that the Pope changed the Sabbath.

They say that they “dissent from the view that the atonement was made upon the cross as is generally held.”. They hold that Christ did not complete an atonement upon the cross for our sins, that our sins are not yet blotted out, but that this will take place when Christ comes again and that eventually Satan will be made the Scapegoat to bear away our sins. ” Absurd!

What does the Bible say?

“And when he had himself purged away our sins sat down on the right of the majesty on high. ” — Heb. 1:3

3. Seventh Day Adventism makes the absurd claim that in 1844 Christ entered the Holy of Holies in the heavenly sanctuary, that He is cleansing it and when the cleansing is finished His Second Coming will occur. They say that He is investigating the sins of His people in order to secure their pardon. Further, they say that when Christ entered the heavenly sanctuary in 1844 the day of pardon ceased and no more sinners could be pardoned. Mrs. White said in 1849, that the angel bade her to avail for sinners as used to be but “I looked but could not see it, for the time of their salvation is passed. ”

Millerites disappointed in Christ not coming in 1843 put it a year ahead to 1844. Then they decided that it was not to earth He was to come at that time, but He entered the heavenly sanctuary, and in consequence the door of mercy was closed to all who were at that time unsaved. They had to open the door eventually in order to make way for their propaganda. When Christ finally emerges from the heavenly sanctuary with the sins of His people which He took from off the sanctuary He will lay these on the Devil who will bear them away into the wilderness. Could anything be more grotesque, outrageous to common sense and a greater travesty of the word of God! Truly the Adventists could put out that sign: “All kinds of turning and twisting done here. “