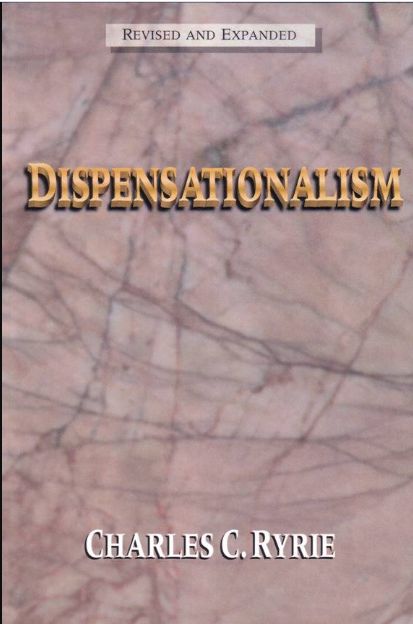 Charles Ryrie – Dispensationalism, Help or Heresy? This short extract is a questioning of whether Dispensationalism is a help or a false doctrine, a false way of looking at the Bible. It consists of two reviews of Ryrie’s Book.

Charles Ryrie – Dispensationalism, Help or Heresy? This short extract is a questioning of whether Dispensationalism is a help or a false doctrine, a false way of looking at the Bible. It consists of two reviews of Ryrie’s Book.

The mention of the word dispensationalism usually evokes an immediate reaction.

For many Christians it reminds them of the help and blessing the ministries and writings of dispensational Bible teachers have been to them. They recall Bible conferences, prophecy conferences, special meetings, or books that awakened in them their first real interest in studying the Bible seriously and in depth.

For others, however, dispensationalism is something to be avoided like the plague. Perhaps they do not even begin to understand what it is, but, if they have heard about it, it has been in a negative way. Indeed, they may have been told that dispensational teaching is heretical. Nevertheless, dispensationalists have occupied a significant place in the history of the church, and they continue to be an important group of earnest believers today.

Like all doctrines, dispensational teaching has undergone systematization and development in its lifetime, though the basic tenets have not changed. At times it has been aggressively attacked. Often caricatures and stereotypes misrepresent and ridicule the viewpoint. When this book was originally published in 1965 under the title Dispensationalism Today its purpose was to present classic dispensational teaching in a positive way in order to correct misunderstandings and allay suspicions about it. I also wanted to show that earlier dispensationalists were more balanced in their statements than usually represented by those who quote them selectively.

This revision does not abandon, change, dilute, or minimize the basic teachings of normative, or classic, dispensationalism. The basic scheme involving the different dispensations remains the most helpful tool of consistent, noncontradictory interpretation of Scripture. References will be made to some books published since 1965, and the recent developments in hermeneutics and the major changes being proposed by so-called progressive dispensationalists are addressed. But the positive presentation of normative dispensationalism remains a primary feature of this revision.

It should be remembered that dispensationalists are conservative, evangelical Christians. Many of the differences of opinion discussed in this book are between evangelicals with whom there is agreement in other important areas of doctrine. It is sincerely intended that what is said about these differences be factual, fair, clear, and in a spirit of helpfulness. I hope that every reader, before putting this book down, will read the last chapter, no matter how mildly or violently he or she may disagree with other parts of the book.

The opposition to dispensational teaching has come from many quarters, and the attacks have been quite varied in their intensity.

There is no interpreter of the Bible who does not recognize the need for certain basic distinctions in the Scriptures. The theological liberal, no matter how much he speaks of the Judaistic background of Christianity, recognizes that Christianity is nevertheless different from Judaism. There may be few or many features of Judaism that, in his mind, carry over into Christianity, but still the message of Jesus was something new. Therefore, the material of the Old Testament is distinguished from that of the New.

It Answers the Need of a Philosophy of History

The Scriptures per se are not a philosophy of history, but they contain one. It is true that the Bible deals with ideas — but with ideas that are interpretations of historical events. This interpretation of the meaning of historical events is the task of theology, and it is a task that is not without its problems. The chief problem is that both covenant and dispensational theologies claim to represent the true philosophy of history as contained in the Scriptures. The problem is further complicated by the fact that, if a philosophy of history is defined as “a systematic interpretation of universal history in accordance with a principle by which historical events and successions are unified and directed toward ultimate meaning,”[26] then in a certain sense both systems of theology meet the basic requirements of the definition. However, the way in which the two systems meet these requirements affirms that dispensationalism is the more valid and helpful system. Notice that the definition centers on three things: (1) the recognition of “historical events and successions,” or a proper concept of the progress of revelation in history; (2) the unifying principle; and (3) the ultimate goal of history. Let us examine both systems in relation to these three features.

This subject will be dealt with later (see chapter 5). For now it suffices to say that dispensationalism claims to employ principles of literal, plain, normal, or historical-grammatical interpretation consistently.

Covenant theologians are well known for their use of nonliteral interpretation, especially when interpreting prophecy, and they are equally well known for their amillennialism, which is only the natural outcome of such a hermeneutic. Premillennialists who are not dispensationalists also have to depart from normal interpretation at certain points in their eschatology. For example, Ladd, in order to add support to his posttribulational view, is forced to regard the 144,000 of Revelation 7 as referring not to literal Israel but to spiritual Israel, or the church.[29] Further, he cannot agree with the dispensationalist’s idea of the Jewish character of Matthew’s gospel,[30] but he nowhere explains, for instance, how he can interpret in any normal way our Lord’s words of commission to the Twelve recorded in Mat. 10:5-10. Anyone who attempts to interpret plainly this commission, which forbade the disciples to go to the Gentiles, and the commission that commands the same group to go to the Gentiles (Mat. 28:19-20) either (1) gives up in confusion or (2) resorts to spiritualizing one of the passages or (3) recognizes a dispensational distinction.
If plain or normal interpretation is the only valid hermeneutical principle and if it is consistently applied, it will cause one to be a dispensationalist. As basic as one believes normal interpretation to be, and as consistently as he uses it in interpreting Scripture, to that extent he will of necessity become a dispensationalist.

Charles Ryrie - Dispensationalism, Help or Heresy? This short extract is a questioning of whether Dispensationalism is a help or a false doctrine, a false way of looking at the Bible. It consists of two reviews of Ryrie's Book.
Version 1 has 1 review, Version 2 has 2 reviews and reformatting.