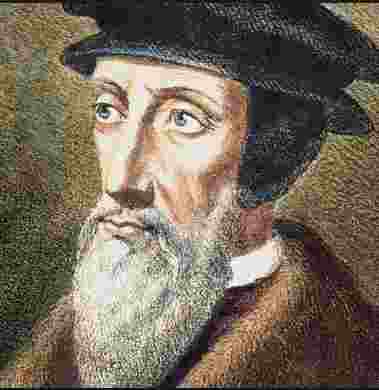 Calvin Institutes of the Christian Religion is a monumental work by Calvin of 18 chapters or Books on Doctrine.

Calvin Institutes of the Christian Religion is a monumental work by Calvin of 18 chapters or Books on Doctrine.

INSTITUTES OF THE CHRISTIAN RELIGION
By John Calvin

Table of Contents of Institutes of the Christian Religion

Book 1 Of the Knowledge of God the Creator.

Eighteen Chapters
1. Connection between the Knowledge of God and the Knowledge of Ourselves. Nature of the connection.
2. What it is to Know God. Tendency of this Knowledge.
3. The Human Mind naturally imbued with the Knowledge of God.
4. This Knowledge stifled or corrupted, ignorantly or maliciously.
5. The Knowledge of God displayed in the fabric and constant Government of the Universe.
6. The need of Scripture as a Guide and Teacher in coming to God as a Creator.
7. The Testimony of the Spirit necessary to give full authority to Scripture. The impiety of pretending that the Credibility of Scripture depends on the judgement of the Church.
8. The Credibility of Scripture sufficiently proved, in so far as Natural Reason admits.
9. All the principles of piety subverted by fanatics who substitute revelations for Scripture.
10. In Scripture, the true God opposed, exclusively, to all the gods of the Heathen.
11. Impiety of attributing a visible form to God. The setting up of Idols a revolt against the True God.
12. God distinguished from Idols, that He may be the exclusive object of Worship.
13. The Unity of the Divine Essence in Three Persons taught in Scripture, from the foundation of the World.
14. In the Creation of the World, and all things in it, the True God distinguished by certain marks from fictitious gods.
15. State in which man was created. The Faculties of the Soul – The Image of God – Free Will – Original Righteousness.
16. The World, created by God, still cherished and protected by Him. Each and all of its parts governed by His Providence.
17. Use to be made of this Doctrine. (from Calvin Institutes of the Christian Religion)
18. The instrumentality of the wicked employed by God, while He continues free from every taint.

Book 2 Of the knowledge of God the Redeemer, in Christ, as first manifested to the fathers under the law, and thereafter to us under the Gospel.

Seventeen Chapters
1. Through the Fall and revolt of Adam the whole Human race made accursed and degenerate. Of Original Sin.
2. Man now deprived of Freedom of Will, and miserably enslaved.
3. Every thing proceeding from the corrupt Nature of Man damnable.
4. How God works in the hearts of men.
5. The Arguments usually alleged in support of Free Will refuted.
6. Redemption for lost man to be sought in Christ.
7. The Law given, not to retain a people for itself, but to keep alive the Hope of Salvation in Christ until his Advent.
8. Exposition of the Moral Law.
9. Christ, though known to the Jews under the Law, yet only manifested under the Gospel.
10. The resemblance between the Old Testament and the New.
11. The difference between the two Testaments.
12. Christ, to perform the Office of Mediator, behaved to become man.
13. Christ clothed with the true substance of Human Nature.
14. How two natures constitute the Person of the Mediator.
15. Three things chiefly to be regarded in Christ; viz., his Offices of Prophet, King, and Priest.
16. How Christ performed the Office of Redeemer in procuring our salvation. The Death, Resurrection, and Ascension of Christ.
17. Christ rightly and properly said to have merited Grace and Salvation for us.

Book 3 The mode of obtaining the grace of Christ. The benefits it confers, and the effects resulting from it.

Twenty-Five Chapters
1. The Benefits of Christ made available to us by the Secret Operation of the Spirit.
2. Of Faith. The Definition of it. Its peculiar properties.
3. Regeneration by Faith. Of Repentance.
4. Penitence, as explained in the sophistical jargon of the Schoolmen, widely different from the purity required by the Gospel. Of Confession and Satisfactions.
5. Of the modes of Supplementing Satisfactions, viz., Indulgences and Purgatory.
6. The Life of a Christian Man. Scriptural Arguments exhorting to it.
7. A Summary of the Christian Life. Of Self-Denial.
8. Of Bearing the Cross – one branch of Self-Denial.
9. Of Meditating on the Future Life.
10. How to use the Present Life, and the comforts of it.
11. Of Justification by Faith. Both the name and the reality defined.
12. Necessity of contemplating the Judgement-seat of God, in order to be seriously convinced of the Doctrine of Gratuitous Justification.
13. Two things to be observed in Gratuitous Justification.
14. The beginning of Justification. In what sense progressive.
15. The boasted merit of Works subversive both of the Glory of God, in bestowing Righteousness, and of the certainty of Salvation.
16. Refutation of the Calumnies by which it is attempted to throw odium on this doctrine.
17. The Promises of the Law and the Gospel reconciled.
18. The Righteousness of Works improperly inferred from Rewards.
19. Of Christian Liberty.
20. Of Prayer – a perpetual exercise of Faith. The daily benefits derived from it.
21. Of the Eternal Election, by which God has predestinated some to Salvation and others to Destruction.
22. This Doctrine confirmed by Proofs from Scripture.
23. Refutation of the Calumnies by which this Doctrine is always unjustly assailed.
24. Election confirmed by the Calling of God. The Reprobate bring upon themselves the righteous destruction to which they are doomed.
25. Of the Last Resurrection.

Book 4 Of the external means or helps by which God allures us into fellowship with Christ, and keeps us in it.

Twenty Chapters
1. Of the True Church. Duty of cultivating Unity with her, as the mother of all the godly.
2. Comparison between the False Church and the True.
3. Of the Teachers and Ministers of the Church. Their Election and Office.
4. Of the State of the Primitive Church, and the Mode of Government in use before the Papacy.
5. The Ancient Form of Government utterly corrupted by the tyranny of the Papacy.
6. Of the Primacy of the Romish See.
7. Of the Beginning and Rise of the Romish Papacy, till it attained a height by which the Liberty of the Church was destroyed, and all true Rule overthrown.
8. Of the Power of the Church in Articles of Faith. The unbridled license of the Papal Church in destroying Purity of Doctrine.
9. Of Councils and their Authority.
10. Of the Power of making Laws. The cruelty of the Pope and his adherents, in this respect, in tyrannically oppressing and destroying Souls.
11. Of the Jurisdiction of the Church and the Abuses of it, as exemplified in the Papacy.
12. Of the Discipline of the Church, and its principal use in Censures and Excommunication.
13. Of Vows. The miserable entanglements caused by Vowing rashly.
14. Of the Sacraments.
15. Of Baptism.
16. Paedobaptism. Its accordance with the Institution of Christ, and the nature of the sign.
17. Of the Lord’s Supper, and the benefits conferred by it.
18. Of the Popish Mass. How it not only profanes, but annihilates the Lord’s Supper.
19. Of the Five Sacraments, falsely so called. Their spuriousness proved, and their true character explained.
20. Of Civil Government.

Calvin Institutes of the Christian Religion