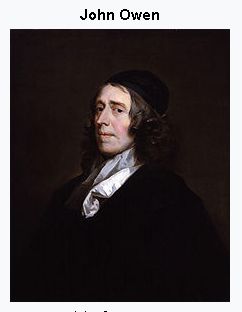 Two Short Catechisms: wherein the Principles of the Doctrine of Christ are unfolded and explained. Proper for all persons to learn before they be admitted to the sacrament of the Lord’s supper; and composed for the use of all congregations in general.

Two Short Catechisms: wherein the Principles of the Doctrine of Christ

are unfolded and explained. Proper for all persons to learn before they be admitted to the sacrament of the Lord’s supper; and composed for the use of all congregations in general.

John Owen (1616 – 24 August 1683) was an English Nonconformist church leader, theologian, and academic administrator at the University of Oxford. He was briefly a member of parliament for the University, sitting in the First Protectorate Parliament of 1654 to 1655.

On 29 April he preached before the Long Parliament. In this sermon, and in his Country Essay for the Practice of Church Government, which he appended to it, his tendency to break away from Presbyterianism to the Independent or Congregational system is seen. Like John Milton, he saw little to choose between “new presbyter” and “old priest.”

He became pastor at Coggeshall in Essex, with a large influx of Flemish tradesmen. His adoption of Congregational principles did not affect his theological position, and in 1647 he again argued against Arminianism in The Death of Death in the Death of Christ, which drew him into long debate with Richard Baxter. He made the friendship of Fairfax while the latter was besieging Colchester, and addressed the army there against religious persecution. He was chosen to preach to parliament on the day after the execution of King Charles I, and succeeded in fulfilling his task without directly mentioning that event.

Another sermon preached on 29 April, a plea for sincerity of religion in high places, won not only the thanks of parliament but the friendship of Oliver Cromwell, who took Owen to Ireland as his chaplain, that he might regulate the affairs of Trinity College, Dublin. He pleaded with the House of Commons for the religious needs of Ireland as some years earlier he had pleaded for those of Wales. In 1650 he accompanied Cromwell on his Scottish campaign. In March 1651, Cromwell, as Chancellor of Oxford University, gave him the deanery of Christ Church Cathedral, Oxford, and made him Vice-Chancellor of Oxford University in September 1652;[5] in both offices he succeeded the Presbyterian, Edward Reynolds. (continue reading on wikipedia.org)